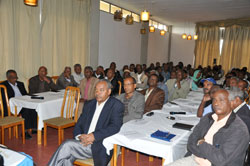 The Ministry of Education yesterday conducted a seminar here in the capital focusing on mother tongues as media of instruction in Elementary education.

Asmara, 02 August 2013 – The Ministry of Education yesterday conducted a seminar here in the capital focusing on mother tongues as media of instruction in Elementary education.

Speaking at the meeting in which department and branch heads, teachers as well as invited guests took part, the Minister of Education, Mr. Semere Rusom, noted that more focus is being made to mother tongue-based education worldwide, and that more research activities are being conducted to this end in the Homeland.

Also speaking on the occasion, Dr. Araya Habtai, consultant in the Curriculum Department, presented a detailed report pertaining to the challenges in connection with mother tongue-mediated education, background of literature in national languages and the merits as well as demerits of such mode of education. He also noted the importance of mother tongues in the conservation of cultural values and linguistic diversity and raising literacy level, as well as language development, among others.

Accordingly, education in the mother tongue is a vital prerequisite for the realization of the cherished national goal of expanding educational outreach, besides its advantage in relation to student comprehension, and the seminar participants put forth views regarding several issues.

In closing remarks, Mr. Musa Hussein Naib, Head of General Education in the Ministry, stated that mother tongues have drawn higher ethnic receptivity as media of instruction, and called on pertinent bodies to enhance participation thereof.