Hero Goes To the Inevitable 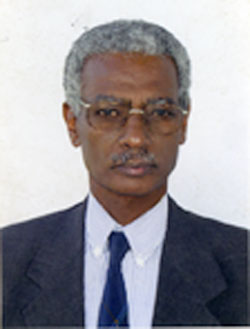 The dawn of August 4, 2013 was a day where Weldemichael Ghebremariam, a veteran fighter and the Minister of Local Government, passed away. The sudden martyrdom of this veteran fighter was a shocking incident for all his family members, comrades, colleagues, and his friends alike. As he was regularly engaged in rigorous office works, nobody expected to hear Mr. Weldemichael departed upon his return from a work tour. Mr. Weldemichael passed away in Keren while returning from Gash- Barka all his tour and work plans unfinished. The tragic day called for the registration of his name in the list of all martyred heroes. He was working with commitment and diligence starting from the period of political and armed struggle for independence, as well as from independence through the reconstruction period and until he passed away. His colleagues and comrades who worked with him in different periods are now in great sorrow for a man of great commitment has passed away.

“Even if I knew he was diligently engaged in Government’s work bearing his serious illness, I never expected he would be departed in such a way.” Brigadier General Abrha Kassa expressed the great shock and sorrow he felt up on hearing the news of Mr. Weldemichael’s martyrdom.

Mr. Alamin Mohammed-Saied, Secretary of the PFDJ, on his part said that being among the patriots who fought for independence during the 1950s, comrade Weldemichael was among the founders of Eritrean Liberation Movement, a member of workers association of that period, if the overall time he spent in the struggle for independence is to be considered he has only a few veterans whose contribution equate with that of him. The details of his contributions during the struggle as well as during the independence period are too vast to be mentioned.

Due to deep sorrow, Mr. Alamin said that he did not feel comfortable to say much but he would share a few of the huge contributions of Mr. Weldemichael in another time. “But, I can assure that all of us will live up to the pelage Mr. Weldemichael and other fallen comrades like him entrusted us.” He said. “The departing of Mr. Weldemichael is not to be mourned about but we should rather farewell him with ululation for he is a great man greatly missed not only by his comrades and colleagues but also by the people of the Horn of Africa.” So, the deep sorrow of his martyrdom is not only of his family members alone, but is of the entire Eritrean people and of the PFDJ. Mr. Alamin finally forwarded a message of condolence to the family members, comrades, and friends of Mr. Weldemichael.

Mr. Weldemichael was among the patriots of freedom who spent much of his life time fighting and inspiring other freedom fighters. His comrades describe him as a man of great patience and

great brilliance. Comparing the lengthy hard times he passed thorough with that of his commitment and perseverance, they define him as a man of great vision, moral, and of an indomitable spirit.

Mr. Tesfay Ghebreslaise, Minister of Land, Water, and Environments is also among the freedom fighters who had close relationship with the late Weldemichael. Pointing out that they worked together for a lengthy period of time, “Excellence of a person is just recognized once you miss him once and forever.” he said “Mr. Weldemichael has taken away with him all the good qualities he possessed.” Mr. Tesfay further said that martyr Weldemicael had a vision that could see the bright future after each gloomy situation, and also had an ability to look at things with patience and carefulness and such qualities make him an outstanding fighter. And finally by expressing his feeling of sorrow to the family members, comrades, and friends of late Weldemicael, he forwarded message of condolence.

The colleagues and close work partners of Mr. Weldemical remember his long time accompaniment during the struggle for independence and during the nation building process with pride and sorrow saying: “Patience, wisdom, care, non-stagnant perseverance and generally a vision that could see a better tomorrow amidst challenging times have all gone with his martyrdom.”

Mr. Tsegay Teamrat who closely worked with Mr. Weldemichael when he was the Minster of Land, Water, and Environment reiterated Mr. Weldemicael’s patience in listening and accepting suggestion and recommendations and finally in making rational judgment. Mr. Tesgay also said that Mr. Weldemichael was not only a fighter or a leader but he played a parental role in showing utmost care to his colleagues.
The martyrdom of a great hero like Mr. Weldemichael is a great sorrow to the people of Eritrea. But, Eritreans would remember him with pride since his martyrdom was not in vain and for he nurtured a number of nationals who could follow his footsteps. A hero only lives which the legacy of his heroic deeds.

“I know we will verify a great deal of growth very soon in the fashion industry.”