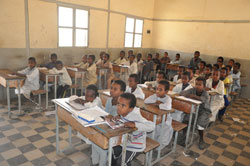 Let alone to get educated with their mother tongue, Eritreans were having difficulties in gaining access to education. If there was hardly any access to education, they were then forced to use colonial languages as a means of instruction from primary through secondary level of education. Hence, they were not only confused by the difficulties of learning a new language, but they were having problems in enriching their native languages. If any native language is not enriched through education, its richness of expression would definitely be diminished provided that the language remains inactive in written form. Hence, any student who does not acquire the necessary ingredients in the early stage would not have competence to grasp complex concepts in higher education. The education provided to any student about different basic concepts during the early stage is what shapes the ability to learn effectively. So, getting educated with one’s mother tongue in the primary school is assistive to students’ comprehension level in the higher education. Understanding such benefits of the mother tongue, Eritrea has been, at least in the primary school, educating its children with their mother tongues. A conference that discussed about the progress of mother language education was held recently. This conference tried to discover its implementation on the ground and to what extent effective has the provision of mother language education been?

Language is part of national identity, it is through language a number of societal values are shared, it is also through which smooth interaction becomes possible. Recognizing its vast benefits, primary education has been given in mother tongue starting from the period of the struggle for independence. Primary schools in the post-independence period have also been offering educational service in all national languages. The Ministry of Education has therefore been working hard to further reinforce mother tongue education. The recently held conference was then held to assess its current stage of development, its effectiveness and how speedy has the knowledge transfer been? An extensive research was also conducted in all regions and the findings

of the research were forwarded for discussion on 1st August 2013 at Emba-Soyra Hotel in the presence of heads of branch offices of different ministries.

Present on the occasion, Mr. Semere Rusom, Minister of Education, pointed out that primary education have been served in mother tongue since long time. Mr. Semere further said that the research was highly essential to identify the challenges and thereby to chart out mitigating plans.

The research was conducted in 18 primary schools that educate in mother tongues. The research was conducted through the distribution of questionnaires to school directors, teachers, and students as well as to parents. According to Dr. Araya Habtai, Couslor of curriculum Development in the Ministry of Education, the primary goal of conducting such a research was to see how effective the implementation of the introduction of mother tongue education in 1991 has been.

The research that was conducted for one year and six months, discovered that the need for educating students in their mother language has been growing, but any deficit that could negatively impact its progress need to be addressed. Dr. Araya said in his report that, mother tongue education in primary schools increases self-confidence of students, increases their initiative and interest to learn more, to understand the subject matter easily, to preserve and develop their mother tongue, to learn the culture and tradition of their environs.

Dr. Araya also highlighted that the overall idea of the participants of the research corresponds with the education policy that has been practiced. The contribution of the mother tongue education in illiteracy, preservation of culture and identity, and in ensuring the enrichment and effectiveness of all national languages are the main achievements of the overall expectations.

According to Dr. Araya, dialect differences and the written text is affected by the dialect. The research also gave emphasis to such difficulties and thus some reference materials such as: glossary texts, dictionary, and grammar books are among the expectations of the beneficiaries.

Some among the recommendations forwarded based on the research indicate that the mother tongue education that has been given up to 5th grade should continue in an enhanced manner. Considering the benefits that could be obtained from mother tongue education such as: cultural identity and equality among all national languages, suggestions were forwarded as regards the need for dispatching teachers who have deep knowledge of cultural values of the respective communities. The need for a lasting solution to dialectical difference and preparation of teaching materials was also among the biggest issue that need to be considered.