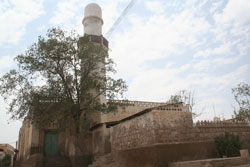 We just celebrated Eid Al-Fater, the end of the month long fasting. The celebration was observed by all Eritreans irrespective of their religion and ethnicity. That attests to the unity and harmony of the Eritrean people, the peaceful co-existence never seen in many parts of the world.

Islam has been introduced in Eritrea in around 1,450 years ago. There are many traces that substantiate the argument. One is the Mosque still intact to tell the history, the Mosque of Sheik Hamal.

Eritrea might be one of the youngest nations in the Horn of Africa but as regards to ancient history and civilization as well as the introduction of Christianity and Islam to the region, it is one of the prominently mentioned countries in expansion and introduction of those religions where today the population distribution of both religions in the country is about 50-50.

Around 1,450 years ago Prophet Mohammed sent his followers across the Red Sea to escape execution, after which many of them began settling in along the Eritrean Red Sea coast, present day Massawa. These settlers built a mosque in “Reési Medri” for worshipping and through time they began mixing and inter-marrying with the people of the region and expanded their faith in the process.

The mosque built by the first settlers in Massawa ages some 1,400 years and is one of the first mosques in Africa. The mosque has historical importance in addition to being evidence of the introduction of Islam in Eritrea at that period of time.

With the expansion of Islam in the region, the followers began building many mosques, starting with the Shaf’ee Mosque, which is believed to be 800 years old. There are also other ancient mosques built during the Turkish colonization which age back to few hundred years but the oldest of all is Mosque Shaf’ee.

Mosque Sheikh Hamal is a quintessential work of architecture with different murals and sculptures that given even more archeological importance. The tomb of Sheikh Hamal, the namesake of the mosque, and his wife is also located within the mosque’s compound. No one has as yet been able to decipher the meaning of the inscription but according to the inscription on the tomb of Shiekh Hamal, believed to have been engraved by either Iranians or Turks.  However there is an Arabic inscription that reads as “Omer Al-Sherif died on the 10th year of Hejira in Massawa”,

According to oral sources Sheikh Hamal’s real name was Omer Al-Sherif and that he arrived in Massawa from Mecca, Saudi Arabia. He has been residing in the area till his time of death and he was known for his teachings and kind deeds among the residents of the area. The mosque was built following his death at the same spot where his residential hut was located.

Massawa, being a strategic port town passed through a lot of ordeals and so have the buildings and residents of this town. The town experienced two earth quakes, one in 1897 were there is no record of the damages sustained, and another in 1923, where majority of the town’s buildings were destroyed.  One of the few buildings that withstood the second earth quake is the Mosque of Sheik Hamal. Mosque Shaf’ee was destroyed during the 1923 earthquake but was reconstructed by the Italian colonizers in the area in its previous place in the 1930s.

Another massive disaster that damaged the port town Massawa was the 1990s bombardment of the town by the Derg regime, and the mosque of Sheikh Hamal survived the bombardment that destroyed 90% of the town’s infrastructure.

This miraculous mosque is unique in that it survived three calamities and is the only standing building built by Turks. Its possession of numerous spiritual scriptures and writings also makes the mosque a national treasure. The port city of Massawa, in addition to being located in the world’s busiest trading lines along the Atlantic Ocean is also a historical tourist site.

The Soviet Union and Its World Influence Part XIV