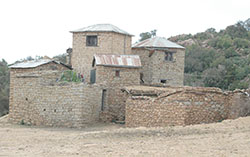 The Debre Bizen Monastery is located at the tip of an escarpment in the country’s topography. The road from Asmara to Nefasit, 25 Kilometers leading to the foot of the Debre Bizen Monastery, displays a breathtaking view where one would enjoy a gradual descent from 2400 meters above sea level to about 1670 meters. The road forming a hairpin bend seems to demand a good and responsible driving experience. The road was curved out through the mountains, all the way from Massawa, by the Italians at the turn of the last century. Most would drive or cycle to Nefasit as early as 4:00 am.  They will leave their vehicles in Nefasit and they start climbing the 825 meters arduous journey on foot.  Some pilgrims would walk for tens of kilometers from far away towns and villages, in fulfillment of their vows they have made the year before

The strenuous trekking up to the Debre Bizen Monastery would take a young man about 45 to 60 minutes. The old, some holding canes, will make it at the range of 85 to 190 minutes. The range of time may vary. Trekking for the young as well as for the old creates a friendly contest. For the rest it could be a covert competition. Some will even bet as who will pay for lunch or some drinks. It is quite enjoyable. In a way the journey would enable a pilgrim to test his physical fitness. “I thought I would easily make it” stated one pilgrim in his late fifties, “but I find

myself completely worn out” “I therefore have to start a regular jogging” he concluded.  He further commented, “As the age progresses so also it seems as if the Debre Bizen Monastery is increasing in height. A young man in his late twenties, Hadgembes, as he told me his name is , was trekking for his first time. He did not believe that it was such an exhaustive journey. If it was not for the moral support of his friend he could have been tempted to abort his trip. Another young man compared the trip to an incubator. If I were an egg, he metaphorically said, the heat created along this tiresome journey would have hatched me to become a chicken.

By the time a pilgrim will reach at the tip of the entrance he will find himself soaked with sweat and thus dehydrated. The old would have to spend another 30 to 45 minutes relaxing before they continue their walk for about 300 to 400 meters to the actual site of the Holy place. Right after the arrival at the entrance pilgrims will rush to pose for a photo by the side of the Big Iron Cross. It will sure be a witness for their trekking along that difficult journey. Most of the pilgrims would have arrived at the monastery by 8:30 or 9:00 a.m. Others will still make it even after the completion of the religious festivities.

Asmarinos have visited the Debre Bizen three or four time, to say the least, in their life time.

Usually many of the male pilgrims’ have had trekked to the monastery of Debre Bizen on the eve, (that is August 10th) .Thus they can celebrate through the overnight mass prayers and hymn of praise, accompanied by the mighty sound of drums and cymbals.

The sacred procession commenced at 09:00 a.m. It was colorfully celebrated.  The monks would march around the church three times in a raw. The ritual basically is meant to escort the Ark of the Covenant, which harbors a replica of the tablets of the Ten Commandments, carried on the head of a monk. The visiting pilgrims in their thousands have also to follow the trails in reverence. The sacred Ark of the Covenant whilst wrapped under cover of an expensive carpet is displayed to the public only during the annual ritual. The inside of the Ark and the Tablets will never be exposed to the public. While in the procession it is customary that the Ark has to be under the shade of a large frame of an umbrella, only designed for the church, hoisted by another monk following closely behind. Such ritual is complemented by the monks melodious songs and rhythmic dances supported by beating of the big drums and their sounding cymbals, in praise of the Lord God. All traditional Orthodox Tewahdo churches are architecturally spherical. The celebrations of the Holy feast were held at an open space in the presence of all the visiting pilgrims. Initially the story of the life of Abune Philipos and his devotion to piety was recounted by a clergy. Later A benediction was given by the highest representative clergy of the Orthodox Church. The celebrations were colorful and inspirational.