The much awaited project to kick off soon 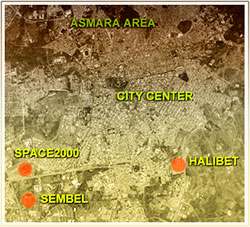 Sembel Housing Project of 1994 which was a first of its kind in the post-independence Eritrea was a major achievement that alleviated the existed deficits of residential houses. That project housed a number of families. Next to that of Sembel Housing Project, two sequel housing projects such as Mai-Temenay Hosing Project carried out by Segen Construction Company and another housing project known as Space 2000 Housing Project played due role in alleviating the ever increasing demand of houses. The recent Asmara Housing Project of 2013 which would cover the construction of apartments, villas and shops in three areas of Asmara is expected to significantly lighten the overly increasing demand of houses.

The first three housing projects carried out in the period between 1994 and 1998 were indeed success stories in the country’s integrated housing project. Thus, the entire Eritrean people have been eagerly awaiting for the launching of such like projects. The time has now ripen that Asmara Housing Projects is about to start recently. This project may not entirely solve the existing deficit of residential houses, but it would of course tremendously satisfy the ever heightening demand and it would become a promising start to open a venue for more such like projects to come.

The new housing project would give Asmara an added beauty and its horizons would be largely extended. More importantly, this project would give fresh and intensified enthusiasm to all nationals who always aspire to see an ever growing country.  The uniformity maintained in the former housing projects was the very reason which contributed for the sustained Asmara’s beauty.  Since the projects are integrated ones, they have uniformity and are by far different from the construction initiatives taken at individual level. Hence, the yet to be constructed houses would become beautifying frames of the already beautiful city.

According to the new plan, the construction of a total of 1,048 apartments, 376 residential houses and 256 for business ventures would get underway this year around Halibet Hospital, Space

and Sembel. In this project, houses that range from 30 to 120 sq. meters and from 125 to 200 square meters respectively are expected to be constructed in the aforementioned areas of Asmara.

A registration form (form 1) has been distributed to be filled by potential buyers. All applicants are expected to deposit 25% of the overall payment as per the chosen type of house.  As per the newly launched notice, deposits can be made at the account in the headquarters of the Housing and Commerce Bank (Bahti-Meskerem Square) entitled “Asmara Housing Project 2013 EURO C/A # 124-5.” The remaining portions of the payments are due to be completed within two years and all transactions should be in EURO.

The new housing project notice has made it clear that any applicant who fails to deposit 25% of the overall payment would be disqualified. Every potential buyer can obtain additional registration information and also download the relevant form from the website www.erhcb.com .

The launching of Asmara Housing Project 2013 would make any person who knew Asmara before wonder if he or she is visiting the same destination. A number of diaspora Eritreans who used to spend their vacation time in hotels or rental houses would become owners of their own home. Nationals in the home land who can afford to buy houses of their choices as per the ranges included in the new housing project would also become beneficiaries. Like its preceding housing projects, the Asmara Housing Project 2013 is expected to answer the long awaited demands of all nationals and it would also evoke increased excitement for more to come. Every success makes one crave for more and bigger accomplishment.

“I feel confidence when I am working with computer”