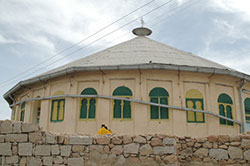 Following the winding up of the colorful religious festivities pilgrims would usually pour into the make shift tents to devour from the food and drinks prepared by the monks. Monks in Debre Bizen lead a modest life. They live in a sweet harmony. Their only occupation is the ceaseless prayer of love to the glory of the Almighty God. They prepare their food and drink themselves from the meager resources they have. In that sacred place, there is no worry of price inflation and other stresses common to the worldly state of affairs. Critically looking at their way of life, one would learn that centuries ago these monks have defied the notion that culinary activities are only confined to women. In a male dominated society it is quite peculiar to see men shouldering kitchen activities.

It is usual to hear most of the pilgrims vowing to return in the following year, with promises to bring some modest donations to the monastery. The donations may comprise of money, carpets, umbrellas, candles and some other items that could be used by the Monastery. While giving their benediction the clergy wished every one good health, peace and prosperity and wanted every pilgrim to see them back next year.

By about 10:30 am Pilgrims, will turn their back to the Monastery and starting to walk facing toward the town of Nefasit. They prepare themselves for another tough physical test. Unlike ascending, descending is much faster. It will take about 40 minutes for a young man and about 55 to 85 minutes for a middle aged man. The natural propulsion of the kinetic energy down along the steep slope pushes one at an alarming and unwanted extra speed. To keep ones balance one has to make countless breaks. A somewhat careless speedy walk can have one stumble and fall.  Taking the needed precautions for several breaks will lead to the inevitable knee and the legs twinge. It is said that it is advisable to hold a cane especially for the elderly. Generally there is an implicit competition as to who will walk down fast. For the wise however, walking down slowly will rather be healthy.

The business of receiving and entertaining the pilgrims turns the town of Nefasit into a vibrant business area for that great occasion. All service giving enterprises keep themselves busy in providing all sorts of food and drinks. Street vendors are also seen with various saleable items displayed in the open air. They probably might have come from the nearby towns. During this years’ pilgrimage to Debre Bizen one would see close to a thousand vehicles parked around the town of Nefasit. With thousands of pilgrims visiting the Monastery one can imagine how the business in the town would look like only for that day. In general pilgrims would feel the warm atmosphere in such momentum. The event is a good example not only for domestic tourism in particular but also for international tourism in general. As international tourism news reveals, it is known that people from all walks of life flock to the Lourdes in France to attend the yearly religious festivities. Lourdes is the world’s most beloved shrine. Nestled in a valley in the southwestern part of the Hautes-Pyreness, it is the scene of Pilgrims gathering from all over the world.

Similar situation can be organized in Eritrea, to boost international tourism, by visiting the Debre Bizen Monastery. Such business strategy can also involve the inclusion of other religious sites in the country commensurate with their time table. Needless to mention, there are myriads of spectacular holy sites in Eritrea worth visiting by any curious adventurer.

The road from the foot of the mountainous terrain in Nefasit to Debre Bizen Monastery is rugged. Yet people enjoy the arduous encounter. However, it would be quite essential to have a sign post erected along the way at a distance of say 75 meters or at any reasonable distance to be decided by engineering experts. While ascending we have noted that, on occasions some pilgrims where loosing their way. They therefore have to trek through some shortcuts with apparent difficulties, where the young can only jump through. However as helping one another are common in Eritrea, some pilgrims will guide the losers along the right track. If international tourism is to be attracted, in due course, the availability of sign posts would make it more attractive. Distances can also be indicated in the posts. Therefore each pilgrim will know exactly how much is left to climb or descend.

The Monastery of Debre Bizen offers a spectacular view of Eritrea’s captivating landscape. Looking down to the steep slope, one would dream to fly using a glider, a parachute or even helicopter.

Sweating, dehydrated and almost debilitated, pilgrims have to spend some time in Nefasit to refresh themselves with food and drinks. People marvel how fast a year passes by. Finally they have to return to their respective places of origin while promising to see each other the following year. Debre Bizen Monastery and the town of Nefasit have entertained their pilgrims, eloquently, with all the Eritrean modesty. One old woman, who was selling soft drinks and tea, blessed the visitors and she hoped to see them back next year. The visitors also thank their hosts for their lovely hospitality and promised to see them next year.

The festival that foster the esprit de corps among Eritrean’s

The Soviet Union and Its World Influence Part X