The festival that foster the esprit de corps among Eritrean’s 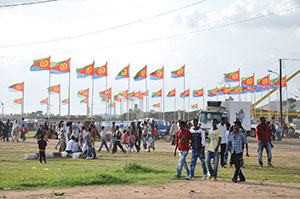 Festivals are of many types, mostly intended to celebrate cultural and religious occasions. The Eritrean National festival is more than being just a fest it has become a symbol of Unity and Harmony for decades.This year’s National Festival for the first time is held in the City of Dekemhare, Southern Region. Dekemhare is found 40 km south east of Asmara. This year’s festival comprise numerous exhibitions and cultural shows that reflect the diversity of Eritrean people and their culture, alongside with the nation building process that is going on throughout the country. The Six Administrative regions and different institutions from nationwide are participating in this year’s festival, each colorfully presenting its tourism capacity and other domains respectively. Thousands of nationals including many foreign nationals are visiting this ten days festival with fascination.

Eritrean National Festival’s history goes back to the hard times, during which Eritreans had been denied their independence. In 1984 the first Eritrean festival was held in Bologna, Italy. As this time the Eritrean people were in quest for freedom from subsequent colonial rules, and the festival had played a fundamental role in the bringing nationals from different corners of the world to one forum. The nationals used this festival

as an event to voice the legitimate question of Independence and promote the Eritrean armed struggle.Since independence such festivals continued with great fervor advancing each year and testifying the esprit de corps among Eritreans.

As Eritrea possess very rich history and culture that goes back to many years since the time of earliest humans,which much have not been exploited

yet.The national festival is playing a crucial role in preserving and transferring this diversified national heritage to posterity.

The nine ethnic group’s style of living and their own individual values, norms and customs is being put on show under the theme of “ShenenYatana” in this year’s festival. In this “ShenenYatana” shows, from the traditional way of building houses and cultural costumes up to the least house hold equipments of each ethnic group is being displayed.The structure of an individual family in one ethnic group and the role of each member of the family aside with its unique hand work equipments and the economic activity it

depends is also part of the show.

The contest of folklore and traditional sport is also part of this year’s festival, which drove huge attention from visitors. This festival pivoted to the revival of this cultural bequest. Folk dances of the nine ethnic groups accompanied with their cultural dressing and folk music are being presented.The contexts of this kind in the festival, is playing a key role in exploring and preserving this

The pavilion prepared by the six administration regions impressively demonstrates Eritrea’s existing huge tourism potentials. The Debub region is one of the six regions endowed with huge number of tourist attraction sites such as Kohaito, Keskese, Belewkelew (Metera), Ham, BeatiSilum, Adi-Quala, Adibari, Enbametae and other historical sites and religious monasteries. In the Dekemhare Festival pictorial report of these sites including samples of the monuments and mummies are being presented, briefing was given to participants by experts about the history and significance of each site.

remains dating back to over one million years in “Buya” a place in the Northern Red Sea region is indeed one of the significant findings in human history,other than this the fossil of an elephant that is discovered in Dogoli dating to 26-28 million years and the history of ancient port of Adulis are some of the findings that are being displayed at the pavilion.Asmara’s rich archeological and

architectural potentials are also being displayed in Maekel region’s pavilion.Likewise, the other regions pavilions are perfectly revealing Eritrea’s tourism potential in colorful manner. Apart from these stunning shows the Eritrean armed struggle pavilion in Dekemhare festival, testifying the unbearable life of the freedom fighters besides the overwhelming courage, resilience and creativity of them has the attraction of the pilgrims to the festival.

This year’s National Festival in Dekemhare was very successful in demonstrating the way of living of the Eritrean people, their rich culture and tradition as well as the economic achievements the country is registering. The festival has also demonstrated the importance of such event in preserving the rich and diversified history and culture of Eritrea.

“Translating one of Sydney Sheldon’s books was a true inspiration”