Week of Festivity and Enlightenment in Dekemhare Part I 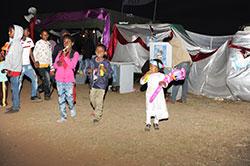 There is culture, there is abundance of relics, there is dance and music, there is history, there is artistry, there is creativity, there is mutual respect and there is every good thing in Eritrea’s national festivals. As everybody starts to be integral part of such an integrated wealth of all-rounded natural, cultural, historical, and artistic content of the festive event, no wonder, one could notice reluctance of observers to leave one show in favor of the other. Everything presented in there never lets one’s attention deviate and thus if one makes a move to see other performances or any showcase, it is merely due to the understanding that one’s appetite can never let you devour everything in simultaneity. Thus, one has to move around now and then so as to enjoy every single offer the festive event grants. An eye never gets satisfied with what it sees and an ear never fills with what it hears and so are all the other senses.

The platform where the national festival was held is a vast plain area entirely encircled by mountainous environs.  There in the plains, one could see cultural

performances of the nine ethnic groups, exhibition halls that comprise different artifacts as well as different displays such as house hold utensils and centuries old parchments along other relics, pavilions where one could learn the traditional livelihoods of the country’s nine ethnic groups, and generally so many practices of the Eritrean society including cultural, religious, and economic among other practices.

Upon making a visit to the exhibition hall of Areza sub-zone one could, for instance, observe a 150 years old armchair, a religious parchment written in 340 A.D, a wooden dish of 1985 called “Ebela”- that was used for milking cow, a 700 years old well-designed wooden safe that was used for depositing money, a huge wooden box of 1.5 meter by 0.5 meter curved from a single long tree, ancient saddles of different types, church garments, bells and crosses of different sorts and of different ages, the list of relics is too lengthy to be mentioned here.

If one strolls down to the Mai-Ayni sub-zone’s village of traditional livelihood, one could learn something unique that was mainly practiced in the ancient times. According to the briefings obtained from there, during the honeymoon time, a bride was not allowed to go out of her husband’s house ever to answer nature’s call. But rather, a new deep hole would be dug within the house hold so as to be used as a toilet.

What was more interesting throughout the festival was that each of the 12 sub-zones of the Southern region make visits among one another in the same manner of the tradition marriage ceremonies conducted in the Tigrinya ethnic group.  All the performances seem as if the one sub-zone has come to take a bride from the other sub-zone which is being visited.

The village of traditional livelihood of Adi-Keyih sub-zone also came with the traditional livelihood of Saho ethnic group. Any visitor could see colorful traditional jewels made up of beads, a crescent shaped wooden pillow used by shepherds while looking after their cattle. A small section known as CADO-CARE (cado-ar’e) in the Saho language is also allocated as a dwelling room for the bridegroom and the bride. One could see a leather piece for piggybacking babies which is aimed at constantly reminding the bride that she is fertile and thus she needs to get prepared for motherhood.

The village of traditional livelihood of the sub-zones of Dubarwa, Emni-Hayli, Adi-kuala, Senafe, Medefera and Tserona as well as their respective exhibition halls showcased different cultural and historical items. Among the items staged there include traditional backing stoves, grinding tools for cereal corps, and kitchen utensils. Traditional honeymoon practices and different sorts of games played while visiting the room for bride and bridegroom also presented to all who visited to observe such practices in each sub-zone.

A first of its kind performance was the newly introduced cultural show called Shenen Yatana. The main aim for introducing this program was to enable each of the 12 sub-zones of the southern region perform the music and dance of all the nine ethnic groups of the country. In this particular show one could wonder to see girls from different sub-zones playing traditional music instrument known as Kirar.

To one’s wonder one could see peculiar animals during making a visit to the exhibition hall of Tserona sub-zone. A cow with additional body part (an add-on) is what astonished every observer.

This cow has an additional body part which looks like a trunk of an elephant. According to the briefings obtained from there, the additional body part used to be a fifth leg, but it has not shown any sign of development and thus with physical development of the cow it remains hanged on its shoulder. There was also a hermaphrodite goat which has a partially developed male organs and as well as a fully developed female organ.