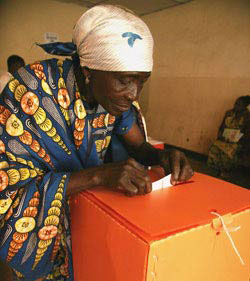 Recent political development in the Northern African countries toppling of governments in Tunisia, Egypt and Libya had brought changes in the governing body but unlike the 1989 to 1990 East European smooth separation from Communism the “Arab spring” has brought disaster. After one year these countries have seen more death and political instability. Iraq today is the death capital of the world 4,000 death in year 2013 alone. One would wonder what went wrong. The instabilities after regime change clearly indicate that change with this manner is not healthy.

What exactly is Democracy? How is it conceptualized?  To me Democracy is a methodology for governing where all collectively binding rules and polices, the people exercise control, collectively enjoy effective equal rights which are essential to acquire prevalent power over the process of collective decision-making.

The present European Democratic states came to existence after many years of Monarchs and Aristocracy governances. Revolutions were waged against feudal, aristocrats, and monarchies France having the democratic constitution of 1793 was the first in the world to introduce male suffrage but not practiced until 1875. The constitution of 1946 gave the French women the same rights as their male counterparts. Australia became a federal state1901 after working class revolution

in 1907. Australia introduced equal male suffrage in the rule of the monarchy in 1918. After the fall of the monarchy full universal suffrage and a parliamentary government was established. In Belgium the working class revolution of 1886 to 1902 and 1913 were brought down by force and severe repression continued until the end of the First World War where full universal suffrage was accepted. In the mid eighteen centuries Europe become parliamentary monarchy Britain was one of the early parliamentary monarchy and the birth place of industrial capitalism, but there was no universal suffrage until 1918 and equal women’s suffrage was introduced in 1928. According to W.D. Burnham, Electoral Behaviors and researcher Morgan Kousser and other writers state that removing property qualification and introduction of literacy test, Connecticut in 1855 and Massachusetts in 1857 was to exclude the Poor Irish Immigrants. Literacy test enfranchised blacks and poor whites in the south; the requirement of advanced registration in person was an added factor the combined effect of the laws was that it bared the participation of 75 to 80 % of the population in presidential elections 1876 to 1900.

In the history of democratization none of the early revolutions established democracy. The constitution produced by the French Revolution was dead on arrival. The industrial revolution, the Danish and Switzerland July revolution, Bismarck leadership in Germany the American Republic and the Italy kingdom of Sardinia all were feudal-dynastic reaction. The World Wars might have in some way help for democracy to flourish in Europe. Mobilization for national liberation, foreign war and military defeat was the cause of democracy case in point France, Germany and Italy. Furthermore, Europe ruled by Monarchies had reached a level of complexity, social stability and sophistication where its citizens could peacefully compete as interest groups. These historical and social factors had brought about the democratization of Europe; in the third world these historical facts are not in place.

Africa has been in constant turmoil since the Western Colonialist dismantled the traditional tribal system that administered the indigenous people for centuries and created states based on their colonial interest disregarding the settlement and geography. In Africa “Democracy” has brought about massive death, population displacement and poverty. Multi-party systems introduced by Western countries have created incurably defective systems. Political parties based on ethnic groups and religion have formed, tribalism is stronger than nationalism which have led to genocides; case in point Rwanda where Hutus killed hundreds of thousands of Tutsis, Sierra Leone where many were killed and amputated, Kenya where thousands were killed, Somalia

after the fall of Siad Barre in 1991 has been regionalized divided into Put land, Somalia land and Somalia; where many lives were lost and the country ruined to the ground. Mali the Islamist had taken over the Northern part of the country and the government taken over by the military. The colonial master French had to come to the rescue and restore the civilian government to power. Democratic Republic of Congo where to date political chaos is the norm. In Africa today one can not speak of a multi-party system if such is the case the end result is that of forming parties based on tribalism, regionalism and religion. In some of theses African countries economic prosperity is at a lower end, the population is peasantry, infrastructure is poor, and social services are dis-functional. There is a dual-economic system where the urban elite in conjunction with settlers had control of the economy and is in better economic strata than the rural population.

Democracy conceptually is good for it provides for civil society and respect for human rights it also has its evil side. Hitler came to power through democracy, Bosnia war crime was legitimized by democracy. South Africa is a democracy yet is one of the most violent and crimes redden country with the highest private security firms in Africa, high income disparity and where workers are gun down for demanding higher wages. The recent events in Egypt, Mali are a testament that Africa needs a virtuous system like the eighteen century Europe and the East Europe that can establish social stability by creating a middle class with self-confidence, free from corruption, and bureaucratic inefficiency. Then and only then can one speak of Democracy.

“I don’t think lessons should be heavy spirited”