If there is a will every thing is possible 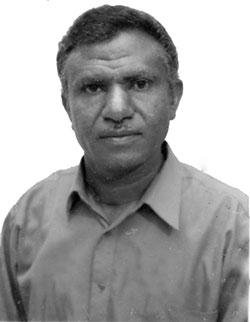 I hear several times from knowledgeable people say that a writer is born and not created. The truth of the saying could be justified when observing people with not much academic background becoming world class writers. In fact some who were poor in their academic performance could become renowned writers. Hence, to become a good writer one has to be smart, observant and a good reader. Practice is also the way forward if one desires to produce readable written materials.

I happen to be a friend with one promising writer in the Tigrigna language. In one of our discussions with him I heard him complaining of not getting degrees from higher education institutions. And the conclusion we reached was that, to have degree from a college or university is good but that does not mean a certificate for becoming a good writer. It is only complementary for ones instinct to write.

He joined the armed struggle for independence while he was 19 years of age, in 1977. After completing military training he was assigned to Heavy Artillery unit. Whenever opportunity comes like entertainment programs the unit organizes he used to produce poems and short stories to entertain his unit. That was the place and time that he began to develop his instinct of writing.

His name is Dawit Yohannes, aka Wedi John.

Dawit recalls that it was in 1982 that he began producing formal articles on occasions like March 8, International Women’s Day, September 1, the beginning of the armed struggle for Eritrean Independence, and on other similar occasions. He was also sending articles to the radio Voice of the Masses.

In 1984 he participated in the first literary competition organized by the Department of National Guidance in the field. That competition, according to him, helped him a great deal to identify himself and how far he could go in the field of writing. With the encouraging response he received from those who read his article, Dawit went on sending articles to magazines and booklets that were being published in the field, like Teatek and Sagem.

After independence, Dawit continued writing short stories and poems with added impetus. He became regular customer to local media outlets. He contributes articles in connection with national holidays, May 24, Independence Day, June 20, Martyrs’ Day, and on other occasions.

Dawit was, for some years, had been editor of Teatek magazine. He had also a column in the Haddas Eritra newspaper known as Meswaeti Waga Harinet (Martyrdom: the Price for Independence). He produced several dramas and song lyrics. His literary contributions are many to count them here. We could mention the song Abei-eiu mekabirka (Where is your grave) written in 1992 and sung by Abeba Haile and the several books he co-produced with other writers.

The big success Dawit has demonstrated recently is that the book he published, ‘Memoir of the Struggle” (Zikiri Gedli). This book has received great acclamation from readers and is proof for Dawit that he would be one of the renowned writers the country has produced. The second part of the book is almost finished and ready for publication. He also told me that there are several books in the process that would be ready for publication in the near future. Dawit in his own words “Ones you are in it there is no way backward. Keep on writing, because the more you are in it becomes addiction.”

Dawit Yohannes developed his instinct of writing from early child hood. His father was a god reader and urging his children to read any thing they find on their way. Every day they read the Holy Book. And after joining school he developed reading fictions that lead his future of becoming a writer.

At the end of our conversation Dawit put a piece of advice to our writers. “Eritrea is full of untapped history. There are people that did miracles in our struggle for independence. That history should be documented and be transferred for posterity. And that is the responsibility of writer. They have historical obligation to unveil the miraculous history of the country”.

“I don’t think lessons should be heavy spirited”