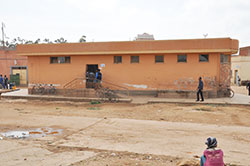 The Administration of the Central region indicated that various public toilets in Asmara are being renovated in collaboration with stakeholders.

Asmara, 30 August 2013 – The Administration of the Central region indicated that various public toilets in Asmara are being renovated in collaboration with stakeholders.

Mr. Kahsai Gebrehiwet, the Administrator of the region, pointed out that there have been some instances of delay in this case despite the Municipal Administration’s plan-based commitment to the construction and renovation of public toilets since the year 2010. He further stated that the role of media outlets was important in facilitating the process on the basis of disclosing public opinion.

The regional Administrator said that line ministries such as that of Health and Education, as well as the Infrastructure and Sanitation departments are involved in the undertaking which would involve installation of electricity and water facilities. He also called on city residents to make judicious and hygienic utilization of the facilities.

Dr. Tesfai Solomon, head of the Health Ministry’s branch in the region, disclosed that an investigation was made previously, and called on the respective Area administrations to play leading role in managing such facilities.

Among the city residents, Mr. Daniel Kibrom and Ms. Haimanot Gebreab, expressed satisfaction with the initiative taken to renovate the community facilities.