Week of Festivity and Enlightenment in Dekemhare PartII 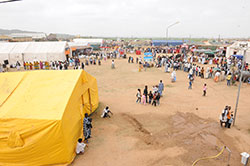 Festivals are occasion where any interested person learn and understand about certain historic facts, societal practices, economic interactions and so much more. Thus, the recent week of festivity held in Dekemhare city in the Southern Region was a festive as well as instructive event for any observer. It was refreshing event for those who have some knowledge about the cultural practices of the country, and it was a fresh experience for those who are to learn the culture through such visits.

So, besides the cultural activities of the 12 sub-zones of the Southern region, all the six regions of the county presented a number of interesting performances and exhibitions. The exhibition hall of the Anseba region, for instance, showcased a number of trophies that are indeed evidence of vibrant sports activities of Eritreans during the colonial times. All the trophies displayed in the exhibition hall are of the period between 1955 and 1973. In the 1950s there were five teams in the Anseba region and particular in the city of Keren. But, the lot of most of the hardly won trophies was only destruction. They were just destined to be burned by the Ethiopian colonial powers. Hence, of all the trophies of the five football teams, the Anseba region was only able to display trophies of ‘LaSalle’ and ‘Anseba’ teams collected from a Catholic Church and form individuals.  However, the trophies of the other three teams were totally destroyed by the then Ethiopian colonial powers. Some of the trophies were won during a competition held for the commemoration of Emperor Haileslasie’s

25th rein. Jerseys of football teams of the 1960s through 1980s were also displayed in the exhibition hall of the Anseba Region.

What was unique in the exhibition hall of the central region was a hanged poster of Byzantine arts from caves located around Asmara. “Bisle” a Cave in Daro-Paulos and “Mariam Cave”-which means cave of Saint Marry in Bardea’e both of which some kilometers from Asmara were among the items which fascinated a number of visitors. Different poster of art-déco buildings of Asmara were feast for the eyes.

The exhibition hall of the Northern Red Sea Region presented excavation procedure of Adulis- an ancient and totally buried city, the exhibition hall of the Gash-Barka Region gave visitors an overall view of the region’s natural and cultural assets. Some of the items displayed in Gash-Barka’s exhibition include bridal ornaments some ingredients used for beatifying brides in different ethnic groups and items used as decorative of internal rooms of the ethnic groups of Kunama, Saho and Hidareb. Agricultural products of the region and prospects of some industrial crops and plantations that are expected to have a promising outcome if widely introduced in the region were among the good news everybody was excitedly hearing during the briefings that were given by experts.

The pavilion of the struggle for independence which gave a pictorial explanation of the final war toward the liberation of the country which demanded huge martyrdom was also an activity which gives an insight to the younger generation about the bitter past every Eritrean was forced to pass through. A Poster that hold portrait pictures of 264 gallant martyrs who fall for the national cause in the Dekemhare Front was among the touching but moral and pride boosting events of the festival. This single poster tells every visitor about the price Eritreans have to pay

for the national independence. The 264 freedom fighters who bestowed their precious lives for the common cause were from the 85th division of the EPLF.

Cultural dance competition was also among the fierce but sweet battles in which all of the 12 sub-zones of the Southern region and also the country’s six regions took part. These competitions make one engrossed to what is being performed and just remains tuned to it. The dram beats just mingle with one’s heart beat and thus you start to hear it from within. One’s eye balls start to roll here and there with the swaying of swords and with the twists the chirographers do. One just become part of the music and dance.