Week of Festivity and Enlightenment in Dekemhare (Part III) 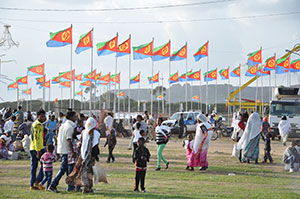 Every event in Eritrea’s national festivals is a symbol of national unity and of all worth having beauties. No matter where it is hosted, every Eritrean festival is an event that brings all beauties of the country in unison. Thus, the beauties of unity in diversity which includes different livelihoods, traditionsand customs in the societal aspect, relics that are ancient but living treasures of the Eritrean society in the historic aspect, natural resources that are terrestrial beauties of the country in the geographic aspect, development undertakings of different sorts in the economic aspect, ancient mosques, monasteries and religious parchments in the religious aspect, up-to-date innovation and renovation activities that have been carried out by Eritrean youth in the creativity aspect and other impressive contents take their respective place in the mind of every Eritrean.

The opening and the closing ceremonies of the national festival, in particular, have their own uniqueness. The opening ceremony gives a gist of the overall cultural performances that are to be presented for 10 consecutive days; ten days where one could enjoy everything of the aforementioned beauties of the country. The closing event has also its own uniqueness for it is an event that sums up all activities of the preceding days.

Nobody wants to get away from any festive event, but every day cannot be a feast. That is why everybody eagerly awaits for such events to come and feels nostalgic when these events come to an end. During the closing events,every music group that participate in the national festival would blow horns or beat drums, ululations would call one’s attention indicating the closing of the festive event is about to come in a few minutes.

While hearing drum beats and ululation as well as observing music and dance performance from each region and from the 12 sub-zones of the Southern region, one could notice that this year’s festival is different in its organization which is regional as well as national festival. It is regional for all the sub-zones of the southern region have presented a portion of what they poses; it is national for each region take part in this festive event with what it thinks is worth presenting.

Cheerful traditional dancers wearing multicolored dress and singers singing in chorus so as to represent traditional dressing style of Eritrea’s nine ethnic groups as well as their respective dance would start to flock on the streets. They would continue their performance until and after they take their seats to see whether they have become winners of the overall presentations. As always, musicians and traditional dancers would take their respective seats in columns. A team leader would sing and the others would follow him singing in unison.

Construction of traditional houses, setting up of exhibition halls, cultural sports, traditional music and dance, transitional livelihood of the country’s nine ethnic groups and their respective oral traditions were among the contents that were featured in the festival of 2013.

To colorfully host the national festival of 2013, preparations were made for about six months starting from January. Apart from the activities mentioned in the above such as cultural music and dance, exhibitions, and traditional sports among others, in this year’s festival, pioneering but with a good start was a program known as ShenenYatana. ShenenYatana was very impressive in its presentation. Through this program, every visitor had a chance to have a glance at the overall tradition of the nine ethnic groups of Eritrea.

As in every national festival, an assessment report of this year’s festival was also presented by representatives of the assessment committee. Based on the assessment carried out, the activities staged or performed in this festival were instinctive as well as delightful. However, some among the 12 sub-zones of the southern region were criticized for not using the space provided for exhibition, other sub-zones were also criticized for the failure in representing the livelihood and traditions of some ethnic groups in its entirety as well asfor not exploring the culture and therefore not exploiting as much as possible. Some other sub-zones were commended for presenting something new which has never been shown in any national festival.

As part of the festive event, a visit to Dekemhare Front was arranged. There briefing about the final but fierce battle for liberation was given by veteran freedom fighters. The visit and the briefing was a first of its kind. What is more is that through a visit to the pavilion of the struggle for independence, everybody was able to have a look at the portrait pictures of more than 200 fallen martyrs from just one division.

The festive event come to an end and according to the report made by representatives of holiday coordination committee, Areza Sub-zone became winner of the overall cultural sports activity,

At regional level, Gash-Bara stood first in cultural sports and ShenenYatana, but the Anseba region ranked first in cultural music and dance. It is the fierce but harmless and worth watching impressive cultural performance, the vibrancy of the national festival still remains hot and always shinning. The more impressive cultural show each region or sub-zone presents, the more admiration of the participants would be and encouraged by the constrictive encouragement of the audience, each cultural group works hard to make its performance more impressive and attention grabbing.

It is when such impressive shows of culture, historic items, economic activities, and creative displays and much more that wins the hearts and minds of a number of people comes to an end; the nostalgic feeling starts to escalate. But, as everybody knows there will be such festive event in the year to come there is apparently much eagerness to be part of it.

“My inspiration is the child artist in me”