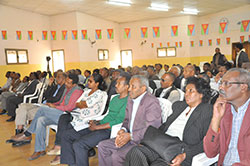 The NUEYS branch in the Central region disclosed that it has effectively accomplished the set annual programs for the year 2012/2013.

Asmara, 07 September 2013 – The NUEYS branch in the Central region disclosed that it has effectively accomplished the set annual programs for the year 2012/2013. It made the statement yesterday at a meeting with stakeholders, during which it was stated that the accomplishments made pertain to raising youth awareness and reinforcement of organization vis-à-vis popularization of cultural values.

Mr. Gellani Ibrahim, Acting head of the branch office, pointed out that the institution would exert stepped up endeavors in collaboration with the PFDJ and government bodies focusing on human resource development and overcoming current challenges.

Reports presented at the meeting indicated that remarkable achievements were made pertaining to enhancement of stakeholder role on youth issues, nurturing the culture of work and reinforcement of the organization for youth workers, among others.

Accordingly, various trips were organized for members of the Union so as to raise their exposure to historical sites, while the role of youths in organizing national events was assessed vital. The activities conducted aiming at promoting health, educational and sports activities were also described to be of significant impact.

Also speaking on the occasion, Mr. Sultan Seid, Chairman of the NUEYS, noted the major role of stakeholders in the Union’s activities, besides calling for further efforts as regards encouraging the role of government bodies and the PFDJ regarding youth issues.

Likewise, Mr. Zerit Tewoldebirhan, Managing director of the Administration of the Central region, lauded the Union’s branch for exerting stepped-up endeavors for added impact on the basis of continued revising of its plans.

The participants of the meeting conducted in-depth discussion on various agendas and put forth views to this end.