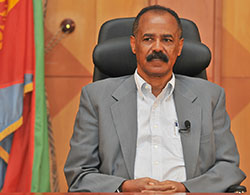 The President made the salient remarks in the course of the third round interview he conducted tonight with the national media outlets, during which he highlighted the conspiracies of human trafficking targeting nationals, besides regional and international issues.

Regarding the prevailing instability and crisis, as well as the causes thereof, he pointed out that the Eritrean government continues to exert endeavors on the basis of policies aimed at fostering durable and stable region of cooperation. Despite this fact, however, such a stance is not palatable to the forces of hegemony characterized with deception, lies, plunder and pretension, President Isaias underlined.

Moreover, he gave detailed briefing as regards the Eritrean government’s positive engagement in connection with the current developments in Egypt, Republic of Sudan, South Sudan and Somalia, as well as the Nile Waters issue.

The President went on to elucidate that the issue of human trafficking which is being facilitated by various spy agencies, especially the US intelligence establishments, focusing on the youth, constituted the major war front over the past 15 years in the case of Eritrea. In this connection, he noted that the Government has been exerting consistent efforts with a view to tackling the concocted pull effect of migration on the basis of engagement with the main countries of destination.

jurisdiction on the part of pertinent institutions, coupled with putting into effect the adequate compensation of victimized youth nationals.

On current developments pertaining to Egypt, Republic of Sudan, South Sudan and Somalia, as well as the Nile Waters, he gave detailed briefing as regards the Eritrean government’s positive engagement.

Concerning the issue of building nation and culture, President Isaias emphasized the vital importance of giving priority to citizens’ aspirations vis-à-vis the need to reinforcing endeavors to this end.

He also commended the determination and commitment of the citizenry inside the country and abroad to the task of building the nation and safeguarding its dignity, in addition to calling for heightened popular awareness and organizational competence.