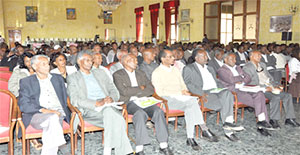 The Ministry of Education has conducted conference in Asmara City Hall over the past 2 days focusing on ongoing endeavors as regards promoting literacy.

Asmara, 09 September 2013 – The Ministry of Education has conducted conference in Asmara City Hall over the past 2 days focusing on ongoing endeavors as regards promoting literacy.

Speaking at the meeting, the Minister of Education, Mr. Semere Russom, said that education is the foundation of all-round development, and that the Government has been persistently working on priority basis to this end.Such effort was also exerted in the days of the armed struggle for independence. Mr. Semere further indicated that stepped up efforts were made pertaining to reinforcement of basic education vis-à-vis equitability, thus giving rise to the laying of the necessary groundwork for the realization of the cherished goal.

He also pointed out that the programs of Adult Education and Eradication of Illiteracy constitute the bases the Ministry has been working on in this regard, and that  gratifying accomplishment has been registered thereof.

Mr. Gebrezgi Dimam, head of Adult Education and Media in the Ministry, said that there exist around 800 million people worldwide who are prone to illiteracy due to lack of equitability in educational services.

Accordingly, the impact of such state of deprivation had utmost negative impact on women and children.

The conference witnessed extensive discussions regarding on a number of related issues.

The vitality of popular participation in all domains of education including in furthering the attained literacy level was stressed in the course of the conference.

Residents of Hagaz called upon to enhance prudent utilization of water