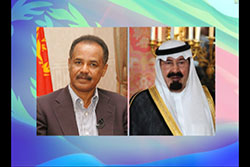 The message pertains to the reinforcement of relations between Eritrea and Saudi Arabia, as well as regional issues of interest to both countries. President Isaias also wished the Saudi monarch good health, in addition to conveying goodwill to the people of Saudi Arabia.

In the course of the meeting, the Saudi leader noted the significance of fostering Eritrean-Saudi ties, and wished President Isaias good health, as well as peace and prosperity to the Eritrean people.

Ministry calls on nationals to practice prudent utilization of water