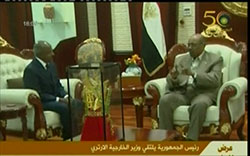 The President’s message is in line with the continued consultations between the two countries and focuses on enhancing bilateral ties and partnership of cooperation.

In the course of the meeting in Khartoum last Wednesday, President Omar Al-Beshir commended the Eritrean government’s concern with the prevailing situation and issues in Sudan, and pointed out that the reinforcement of the existing relations between the two countries in various domains is for the benefit of their citizens.

Meanwhile, Foreign Minister Osman Saleh conducted meeting with the Sudanese Vice President, Mr. Ali Osman Mohammed Taha, during which the two sides reached agreement to reinforce Eritrean-Sudanese ties and cooperation in a manner that it becomes exemplary for the region.

Vice President Ali Osman Mohammed Taha lauded Eritrea’s role in the Sudanese peace process, and pointed out that Eritrean-Sudanese coordination in connection with regional issues of mutual interest to both sides would give added impetus to the historical and people-based ties.