“Movies and digital photos too are an outline of art” 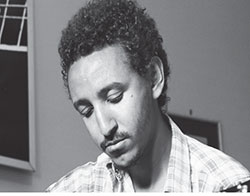 His name is SelomonTsehaye, he was born in Asmara and he is a young artist whom in his late twenties took by storm many spectators with his poly rounded talents, especially his editing capacity. He recently graduated with a Degree from the Medical School of Asmara and now is doing his national service at theHalibet Hospital.

-Let’s start our conversation by talking a bit about your childhood dreams and wishes.

Painting, drawing, making a sound by composing notes, creating something out of scratch… these things: I liked doing the most. My dream was to become an artist that not only people recognized but an artist that could create big works that would survive any social or conventional changes throughout generations.

-Isn’t this too much for a kid to come up with?

Well, it is not. Obviously most of the kids would not understand the meaning of “socio-conventional changes and upgrades” but I noticed because as a teenager I liked contemporary artistic works and artistic productions of the past. Songs, paintings, movies from the past that only I hear my parents and friends talking about, but I would know how to explain it because I don’t know how these thoughts matured in me: I sincerely was influenced by the artistic productions of the past. And this is how I ended up wanting to create something of my own that would be appreciated for a very long time.

-I heard you are a musician too.

It is true, it all started when I was in very early teenage years I had a friend that loved me playing the guitar so I would always do it for him. One day as I was playing my guitar in his house a middle aged European woman listened to my music and she started applauding. She invited me to join her band as they were in Asmara on a tour and I did, I practiced for more than two weeks and then I got to perform live with the band at Cinema Roma. That was my first appearance to the public as a musician and it was also an opportunity in which I had a chance to meet well known Eritrean musicians, furthermore it obviously paved my way to the artistic world.

-You got me curios; I would like to know what is the meaning of “art” to you?

I have an esthetic point of view when it comes to art.In art I basically I look forward to a permanent concept of beauty. See, I don’t support the thought of art as an educational or didactic fixation. Art has to be beautiful because it is the only structure in which “true beauty” is enhanced. Whether it is illustration of something delightful or scary or it could be simply a plain depiction of something bare, it is always a form of beauty. Art can be a form of consolation and a breath talking item, as a spectator one has to just be impressed and have no moral expectations from art.

-According to you, are films and movies a form of art too?

Definitely! Art started way before color tubes and brushes were invented, it all goes back to the origins of humanity: back when people started graffiti in their caves. Representing their life styles and so on… so for me movies and digital photos too are an outline of art , it is true that they are few of the thousands improvements  brought out by technology but they are still a very upgraded form of art. I hate it when some people exclude techno or digital pictures out of the concept ofart, art is so vest that it extends its borders to different aspects, ideas and philosophies. That is why I do editing as well.

-You are indeed a  movie editor and director. Tell us something about this particular aspect of you.

I would not be confident about my directing because I believe I have a long way to go but so far I have enjoyed editing so very much. I started with the editing of some digital photos back when I was in my late teenage years and I improved my skills in my early twenties.

-What do you think of it?

It is not an easy job, but it takes more time than the filming part. It is vital because as an editor one has to be really careful in what he or she is doing because editing is where ones talent has to definitely meet the expectation of the writer and director. And most importantly editing is the touch in which the exquisiteness of the movie its self is enriched. So the job requires a lot of delicacy, slenderness and attention.

-How many films have you worked in so far?

Ten in general, but two of them are still to come out. They are not completed yet.

It was a “Gold Remi Award Winner for Best Foreign Film”, and also was recognized for the “best leading actress nomination”. The editing was essential, and actually I would deny the hard work we had put in the editing so that we could have a good outcome, nevertheless what made the movie more stunning was the work of everyone that was involved in the project, starting from the story line, to the directing and acting and so many other aspects. A movie is a result of the work of a lot of professions.

-What about the doctor side of you…

I am a doctor too. I graduated recently and am working as doctor at the Halibet Hospital. I love both of my professions. And I rely on both of them to make a living and lead a happy life in which I get to enjoy my professions.

-Are we to expect more from you?

Of course, there is two more movies one the way. And as I told you before I want to create unforgettable works so am working really hard to make that childhood dream and my actual aim to make it real.

-Well good luck, thank you for this interview.