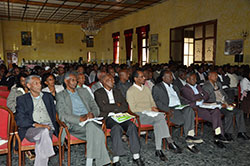 Fathers and mothers, youths and adults in general who never received to education due to different reasons have been called upon to take maximum advantage of literacy programs organized by Eritrea’s Education Ministry. A compulsory education for all children of school age has also made due contribution in the decline of illiteracy. As Eritrea’s society gives too much credit to knowledge and wisdom and thus prioritizes the intellectual rather than material benefits of education, a number of people have been actively taking the advantage that could be obtained through education. Such initiative of the Eritrean people and the urge towards knowledge has by far reduced the country’s illiteracy range.

There is no doubt the more illiteracy is prevalent, the more negative impacts in socio-economic, cultural, historic, and linguistic aspects would be. Thus, literacy is a multi-faceted tool that could positively affect development of any sort in any given nation.

Bearing the aforementioned fact into consideration, Eritrea has been diligently working to educate its people as much as possible and also to the extent that seems impossible. Apart from the programs that used to be carried out in the pre-independence period in the then liberated areas, as of independence literacy programs have been regularly carried out in all six regions of the country.

According to a research of 2010, seventy five percent of the people of Eritrea are literates. This result has been attained though the concerted efforts that have been exerted to educate mainly the female population of the country and all children of school age. What awaits to be achieved, however, allows no relaxation.

Even though eradication of illiteracy has been Eritrea’s all time goal, as of 2000 the country sets to reduce the illiteracy level to a nominal stage. Despite the promising accomplishment, there is still a huge gap between the urban and ruler areas as well as between the male and female population. Illiteracy among the female population particular need to be addressed urgently.

If the overall picture of illiteracy prevalence in the country is to be considered there is still a gab from one region to another, from one sub-zone to another, and from a village to a village. What has so far accomplished has narrowed the gap dramatically, as the country’s commitment towards providing equal access to education is still prevalent, there is high expectation to achieve much more.

As the disadvantaged areas of the country has been identified, taking measures that aim at narrowing the gap of educational access is what to be accomplished in the upcoming two years and after. Recognizing the benefits of education towards accelerating development, efficient healthcare, generating increased incomes and effective use of technology among others, “Education for all” has been the slogan chosen to combat illiteracy.

In the commemorative event of World Literacy Day 2013, the Ministry of Education reiterates its regular plan to work under the leading principle “literacy for all” but also plans to ensure that there should be no village with illiterate population. Accordingly the Ministry is planning to meet the setout plan through the guiding principle that says “Let’s work together to ensure literacy realized in any village.”

Extensive reports and discussion points were forwarded in the conference held in connection with World Literacy Day from 7 to 8 September 2013. This year’s conference has indeed gave an overall view of the country’s illiteracy situation. What indeed has so far been accomplished towards promoting literacy? What were the deficits and what has to be done so as to address the challenges?

“We are at a good stage in our agricultural endeavor….”President Isaias

“Movies and digital photos too are an outline of art”