Reorganization and assignment at all levels in Government and PFDJ bodies would continue: President Isaias 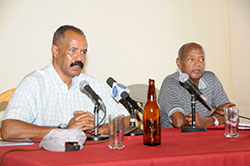 President Isaias Afwerki said that reorganization and assignment in Government and PFDJ bodies would continue at all levels with a view to ensuring political dynamism and leadership capacity.

Asmara, 17 September 2013 – President Isaias Afwerki said that reorganization and assignment in Government and PFDJ bodies would continue at all levels with a view to ensuring political dynamism and leadership capacity.

The President made the statement today at a meeting of regional Administrators and PFDJ heads in Embatkala town. In a briefing he gave regarding the restructuring of government and PFDJ institutions, President Isaias noted the demerits of adhering to routine structure and organization in connection with the changing situations and expanding activities, and hence the need for introducing change to this end phase by phase. Accordingly, the resort made to restructuring and placement at sub-zonal level comprises the initial move which is expected to continue in all levels of administrations, ministries, PFDJ bodies and national associations, he elaborated.

President Isaias went on to explain that the priority objective thereof is ensuring political dynamism and effective management on the basis of upgrading organization. He further highlighted the vitality of consistent political work and organizing training programs in this regard.

Following the President’s briefings, Mr. Al-Amin Mohammed Seid, PFDJ Secretary, indicated that the meeting organized by the People’s Front is aimed at reinforcing the understanding of heads regarding the objective situation in the country, deepening understanding as regards priorities and challenges, promoting work coordination between PFDJ and Administrative bodies, as well as devising work methodologies that would ensure effectiveness, efficiency and accountability. He also stated that the restructuring process would involve all public institutions inside the country and

abroad, and that change has already been put into effect in the National Union of Eritrean Youth and Students (NUEYS), and thus a new Executive Committee has assumed duty.

Moreover, Mr. Hagos Gebrehiwet, Head of Economic Affairs at the PFDJ, presented explanation pertaining to the stance of the Front regarding managerial excellence. Recalling that the People’s Front possessed rich experience, he asserted that it has succeeded in fulfilling historical tasks through limited resources and nurturing vital leadership values. Mr. Hagos went on to underline the significance of consistent renewal of such organizational attributes, in addition to spelling out the paramount importance of continued appraisal and assessment of organizational capacity and work accomplishment. In this connection, the PFDJ official said that the task of nurturing youths who would assume work responsibility at all administrative levels is imperative.

The ongoing meeting in which around 150 heads and cadres are taking part is expected to continue until the 20th of this month. Furthermore, a number of study papers would be presented in the course of the meeting, according to reports.