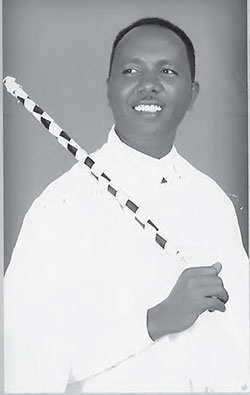 His full name is Abera Beyene, born in 1997 in a small village of the Southern Region: he is a very well known musician. His talents of playing the traditional music instrument called “Chira Wata” have been taking by storm many passionate fans of the traditional Tigrigna music.

-When was your very first time in which you played the instrument?

I fell in love with “Chira Wata” ever since I was a little boy. Since I grew in the country side tradition there is gorgeously still alive, so I have seen many of my older brothers and friends playing different instruments while looking after their livestock or doing any other activities typical of the rural life. And in the evening they would gather up and play their instruments while drinking our traditional drink: “Suwa”. However I… since I was a little kid, I could not join them: well, they wouldn’t let me. But when I turned 15 I actually ended up being the most loved player of the instrument so that was when I started having audiences of my own.

-What is “Chira Wata”? Can you describe it to our readers?

I have noticed that in the city, a lot of Asmarinos amongst the youngest generation don’t know anything about this instrument.  But it is a traditional cord instrument made out of simple things but it creates one of the most wonderful sounds ever.

Well, now it has been upgraded in so many ways. There is even electrical “Chira Wata”: but my first “Chira Wata” ever was made in the traditional way. My father made it for me and he practically made it out of scratch: a string, a stick in which that connects the string with the rest part of the instrument which is a box made out of dry animal pelt.

-So your parents actually encouraged you to play the instrument.

-But you turned out to be a musician and you even published an album.

Yes, six years ago. My father had passed away the year before so he couldn’t live the part of my success. At that moment I didn’t tell any member of my family about my album, so when my mom heard my name on the radio she literally freaked out. She didn’t want me to be a musician but out to be one and that really made her mad. What she hated the most though was the fact that when people congratulated her for my successes; she probably thought of it as a lame joke. She couldn’t take it anymore so she came to visit me in my military unit. I knew she had come with a load of scolding as soon as she got out of the bus.

-From a cherished young player to a well known singer, how did it happen?

After I went to do my military service after finishing high school, I joined the army and it was the time the TPLF war of aggression against our country. And whenever we had some free time to spare I used to play my instrument for the members of my unit. That is how I got noticed and so I got moved to the cultural group of the Defense Ministry.  And in time I published the album.

Obviously it was realized thanks to the cooperation of many of my partners in the cultural group as well as other people that thought I had something that could revive our traditional music.

-And I think it did because the album was acclaimed by a rather large range of people of different age.

It did. I myself was surprised, it was because it included “guayla” (traditional dance) and our people where ever they are they love to dance “guayla”. We don’t miss the slightest chance to move our shoulders while dancing. And am not joking because this fact is totally true: aside from our country my band and I went on tours to Sudan, Germany, Swiss, Holland and Italy.

-What about your second album?

People had expected more “guyla” song so it had a good outcome.

-Are we to expect more for the future?

Certainly! We are working on a mini album and it will come out soon.

-Well, good luck and thank you for being here with us today.

The pleasure is all mine.

Dream of a reality