New phase of relations and partnership towards fostering Eritrean-Yemeni ties in the making: Yemeni leader 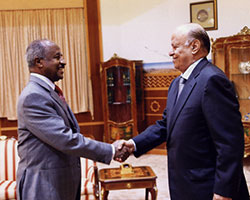 The President of Yemen, Mr. Abd Rabbuh Mansur Hadi, said that a new phase of relations and partnership towards fostering the historic Eritrean-Yemeni ties is in the making.

Asmara, 20 September 2013 – The President of Yemen, Mr. Abd Rabbuh Mansur Hadi, said that a new phase of relations and partnership towards fostering the historic Eritrean-Yemeni ties is in the making.

He made the remarks upon receiving a message from President Isaias Afwerki focusing on strengthening of bilateral relations and mutual benefit, and holding discussion with Eritrean Foreign Minister Osman Saleh.

Noting the longstanding and people-based ties between both countries, the Yemeni leader pointed out that the reinforcement of such ties is of paramount significance as regards ensuring peace and stability in the region. He further commended President Isaias’ message and Mr. Osman Saleh’s visit.

President Abd Rabbuh Mansur Hadi asserted that his country would stand alongside Eritrea in its endeavors of ensuring legitimate national rights. He also indicated that the holding of a Joint Ministerial Meeting before December is vital pertaining to the enhancement of bilateral ties and relations of partnership.

Foreign Minister Osman Saleh stated on his part that the benefit of developing Eritrean-Yemeni ties and the complementarity thereof is beyond mutual advantage of both peoples, and expressed Eritrea’s readiness for higher collaboration to this end.

It is to be recalled that Mr. Osman Saleh held discussion with his Yemeni counterpart, Dr. Abubakr Al-Qirbi, focusing on furthering bilateral relations and cooperation.