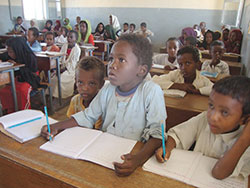 The actual literacy rate in Eritrea is 64.6 as per the research conducted in 2010 and this figure is expected to rise by more than 20% by 2015. To meet such a goal, complementary primary school education for out-school children between the age groups of 9 and 14 have been offered in different areas of the country. This education program have also been enhanced through the opening of community rural libraries. Apart from children of 9 and 14 age groups, the educational opportunity has also been open for adults without age restriction.

According to an End Decade Assessment on Adult literacy program conducted by the Ministry of Education in 2011, centers for adult literacy used to be 31 in the wake of independence and this number grew to 57 in 2010, the number of newly opened centers for adult education were increased from only 103 to 842, the number of literacy program participants also increased from just 4500 to 36,000, and  if literacy program was given by only three local language, by 2010 the education program was offered in eight Eritrean languages. What is more is that if there were only 33 libraries in 1999, this number reached ninety two in 2010, and if there were only 11 text books written in Tigrinya during the period of the struggle for independence, there were 120 books written in eight languages of the country have been used in primary through secondary school until 2010.

The report of the ministry of education mentioned earlier gives a clear picture about literacy status in Eritrea. The decrease of illiteracy rate from 80% to only 35% is a vivid indication of the achievements registered in literacy program staring from the wake of independence and particular in the period between 2000 and 2010.

As of 1998, the number of participants of adult education and generally literacy program has grown in a number of folds in all regions of the country but with an exception to the central region.

The major achievement registered in adult literacy program was in the academic years between 2002/2003 and 2005/2006. But the programs has not progressed in the same pace it started like that of the aforementioned academic years. If a major progress was registered in just three years, there is a huge possibility for the program to register a redoubled achievement in the upcoming two years by just adhering to the procedures that were found instrumental towards promoting and increasing the country’s literacy rate.

The use of mother tongue as a means of instruction particular in primary school and in adult literacy program is what contributed most in the growth of the country’s literacy rate. As mentioned earlier, the adult literacy program has been offered in eight local languages and this accords with the educational policy that favors the use of mother tongue particularly in primary schools.

As per the report in the research conducted by the Ministry of Education, Southern Red Sea and Gash-Barka regions and some areas of the Anseba region are still lagging behind due to different reasons. In the last decade, there was encouraging outcome in the literacy programs carried out in the central and southern regions of the country.

The most exciting progress registered was, however, an increase in the participation of children who missed the opportunity of getting educated at the time they reached school age due to different reasons. Since the inception of the program and until 2010, more than 17,000 children have gained an opportunity to pursue education in their locality. Most of these children do not only become regular students but some of them have joined secondary schools. What we have seen so far has been about the participation of literacy program beneficiaries; but how about engagement of teacher? Is there a possibility for such an achievement to be registered without due role of teachers is also what needs to be posed as a question?

Rare beauties of the Eritrean Red Sea Part I