Rare beauties of the Eritrean Red Sea Part I 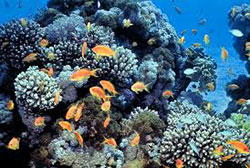 With about 1,300 kilometers coastline, along with hundreds of coast around its more than 30 islands, Eritrea is the proud owner of over 11% of the total area of the Red Sea.

Every aspect of the Eritrean Red Sea speaks of yet unexploited potentials, ranging from the numerous islands offering outstanding diving spots and mesmerizing white sandy beaches to the rich biodiversity within the sea. Mangroves, around 10 types of sea grass and seaweed, salt bushes also make part of Eritrean marine resources.

The Red Sea is also a global hotspot for marine biology and home to rare fish species. In fact, almost 20 per cent of the fish species found here are not found anywhere else in the world. Among the most common types of fish Jellyfish, Barracuda, Black Bass, Groupers, Manta Ray, Kingfish, Parrot Fish, Snappers, Coral Fish, Puffer Fish, etc. Over a thousand types of fish and 220 types of corals are reportedly found around the Dahlak Archipelago only.

One of the significant Eritrean marine resources is the abundance of coral reefs. Spectacular coral reefs, which spread for 20-30 kilometers, are found in every coastline and all off shore islands and are all in pristine condition. On top of being a habitat to various types of fish, a coral reef is also high demand for ornamentation purposes.

Still in the ecosystem, the Eritrean coastline is home to the endangered dugong (sea cow), various species of birds, nesting turtles, as well as crabs and lobsters. Whales and dolphins, which are frequently seen around the Dahlak Islands, are also part of the Eritrean marine fauna.

The Red Sea pristine waters also offer ample opportunities for underwater explorations through diving and snorkeling. On top of the colorful underwater life, divers can also explore old Italian shipwrecks, which pose as archeological evidences of one of early man’s encounters with the sea.

Apart from these there are tourist attraction features of the Red Sea, researchers have assessed that the Red Sea is also rich in oil and natural gas while there is very high potential for harnessing geothermal energy. It also yields several minerals like copper nickel, cobalt, magnesium, titanium, aluminum, potassium, lead, etc. the list goes on.

At the historical level, the Red Sea was an important trade route throughout human history, linking the trade goods of India and the Far East with the markets of Egypt and Europe, through its ports of Adulis and Zula.

-Eritrea’s Red Sea has a total of 355 offshore islands, only ten of which are inhabited while the remaining 137 have no given names. Temperature in the islands varies from 35-45 degree centigrade between the months of May and September, while from November to February scores of 175-250 mm of rainfall can be registered.