“No doubt, computer is the best innovative creation” 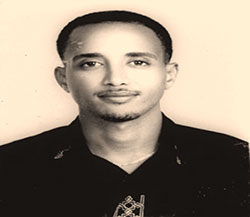 Undoubtedly we can say that modern world will be incomplete without computers and their applications. It has become so common in our daily lives that it is almost impossible to imagine life without the use of computers. We get all the modern facilities; thanks to the invention of Computers! Let’s meet today Henok Haile a young computer expert whom is today a professional computer technician working under the ministry of defense.

-Welcome, we might as well start today’s interview with a brief introduction of a “computer”. What is the use of a computer?

Technically a computer is a programmable machine. The two principal characteristics of a computer are: it responds to a specific set of instructions in a well-defined manner and it can execute a prerecorded list of instructions (a program). Modern computers are electronic and digital. The actual machinery — wires, transistors, and circuits — is called hardware; the instructions and data are called software.All general-purpose computers require the following hardware components:memory:this is the part that enables a computer to store, at least temporarily, data and programs. There is the so calledmass storagedevice:it allows a computer to permanently retain large amounts of data. Common mass storage devices include disk drives and tape drives. We also have the input device: usually a keyboard and mouse, the input device is the conduit through which data and instructions enter a computer. As well as output device: a display screen, printer, or other device that lets you see what the computer has accomplished.  And at last the central processing unit(CPU): the heart of the computer, this is the component that actually executes instructions. In addition to these components, many others make it possible for the basic components to work together efficiently. For example, every computer requires a bus that transmits data from one part of the computer to another.

-How would you explain the use of a computer?

If I am to talk about the use of a computer I would say that I’d better write a whole book. I mean computers are able to solve trillions of mathematical problems within a fraction of a second; computers also play a pivotal role in our daily life in the form of Eshopping. Shopping via internet is common now-a-days. Marketing, shopping, advertising, fashion designing, event organizing, job seeking, etc are all the latest usage of computers. Its usage and service applications can be classified into various categories. Thus it is slowly and positively dominating the lives of mankind, being a great source of information, education and entertainment! Plus… super computers are generally used for banking transactions, to keep track of railways, control aircrafts, and manage telecommunication system effectively, accurately and conveniently. Super computers are also used to perform complex surgeries in operation theatres. Laser surgery can be done easily, accurately and successfully now-a-days. Earlier, it was merely a dream to travel in space, but the computers have made it possible to discover new heavenly bodies in space. Space travel has provided new information about planets and universe. No doubt, computer is the best innovative creation of Scientists, which serves the mankind in the best possible way. It is quite evident that our future generation will enjoy more creations and enjoy the fruits of labour of today’s mankind.  And last but not least it also is a great means of entertainment to youngsters too, as they love using play stations and other video games. Just look around and we will find computers in every walk of life. The world without computers is unimaginable! Our lives would come at a standstill without computers. The world has become a global village due to telecommunication system worldwide. The knowledge about Space, Planetary System and the Universe as a whole, has come to our finger tips because of the latest developments in Science and Technology. Would this be enough I could go on for hours talking about the use of computers nowadays…

-This would be pretty much enough. How about the classification of computers?

Obviously there are many types of computer but generally they can be class classified by size and power as follows, though there is considerable overlap, there is:personal computer: a small,

single-user computer based on a microprocessor. In addition to the microprocessor, a personal computer has a keyboard for entering data, a monitor for displaying information, and a storage device for saving data.  Workstation: a powerful, single-user computer. A workstation is like a personal computer, but it has a more powerful microprocessor and a higher-quality monitor. Minicomputer: a multi-user computer capable of supporting from 10 to hundreds of users simultaneously. Mainframe: a powerful multi-user computer capable of supporting many hundreds or thousands of users simultaneously. Supercomputer: an extremely fast computer that can perform hundreds of millions of instructions per second. So far these would be the main ones…

-Many believe that computers can also be dangerous. What do you think about this?

There is a bad side to every good side of anything, side effects are inevitable but compared to the uses we get out of computers I would say it’s not a big of a deal. Besides if used properly there could be no harm at all, recently I read how computer games are destroying many youngsters, but computer can also help them study effectively and widen their knowledge. Kids should be taken care of, till they know how to separate the good from the bad. We should also know that researchers don’t expect computers to replace human functionality altogether. There was a reason that the Jeopardy-winning computer Watson was named after a real human being and competed with actual humans. The true success of cognitive computing will not be judged by its ability to replace the functions of the human brain, it will be the innovations it unleashes by providing people with a better quality of life and the vital information needed to free up creative problem solving as we tackle our toughest challenges.

-You wrote a book in 2005, what is about? And what inspired you to write such a book?

I wrote a book entitled “Introduction to the components of a computer”; my aim was practically to prepare a book in Tigrigna through which I could present the technicality and the use of a computer. If I have to talk about my inspirations though; I would go back all the way to junior and high school: that is when I actually got to know the computerized world. So in few words the inspirations for this book would be the passionate child in me and the knowledge I gathered in many courses.

I certainly did especially trough out high school, the first course I took was about a general introduction to a computer and I learned a lot of things about THE OPERATING SYSTEM, afterwards I got an A+ diploma in “PC UPGARDE AND ASSEMBLING” and later on I took courses in “COMPUTER INGINARING AND PROGRAMMING”.

-What did you study in college?

Accounting, and certainly you must be thinking why would I graduate in accounting when I am a mad fan of computers?

-Yes, I was about to ask you that…

Well, that is because my course included management, secretarial science and computer science. So it was a smart choice…

-Are you currently working on something new?

Yes I am, in the near future I am about to publish another didactical computer book. It is an application book in which I hoping I will present a more upgraded analysis of a computer. It is going to take me a bit of time because I am working really hard on it.

-Well, good luck on that and thank you for being here with us today.

From Cultural Heritages of Eritrea: On Eritrean Traditional Fairies