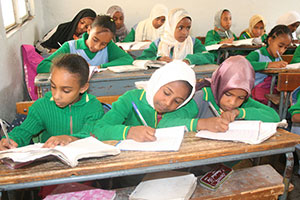 Eritrea’s literacy program has been showing steady progress. There are certain factors which contributed most towards its promotion. An increasing eagerness of students from different age groups and particularly that of the age group between 15 and 45 has been the most contributing factor. No matter how powerful the educational background at individual level is, the Eritrean society gives utmost priority to education. Both the educated and uneducated individuals give due credit to the benefits of education. So, if there is active engagement of teachers, it only stems from the common understanding that gives due value to education.

Teachers who engaged in the eradication of illiteracy have been members of national service or members of any community at a village level or else regular teachers of adult literacy. Involvement of teachers from within each respective community constitute the most portion of the overall number of teachers. In most villages those to teach and those to get educated are from the same community. Such teachers from among the communities could understand the needs of the beneficiaries other than any teacher assigned to work in some hard-to-reach areas.

But, there have been concerns about the competence of teachers who received no training of any sort and thus teaching in a traditional manner.

There have been a growing number of 3rd graders, and this people need ways to gain access to skill acquiring training program that could help them improve their livelihood. A number of parents who gained access to adult literacy program, are now able to read, understand, and sign by themselves during parental visit to schools. A great deal of those educated through literacy program are now able to engage in private and governmental jobs where reading and writing ability is compulsory. Thus, the effect of the literacy program that have been carried out thorough out the country is somehow encouraging.

However, the success achieved in Eritrea’s literacy program has to tackle challenges that could negatively affect its progress. Some among the challenges include: deficiency of educational materials, lack of effective archiving system, and insufficient number of mother tongue teachers in some areas. Despite such like and other shortcomings, the literacy program has been succeeding steadily if not in the same manner as expected.

What achieved in the last 10 years, which is from 2000 to 2010, was through fighting against all odds. A research conducted by the Ministry of Education about the progress made in the last decade in adult literacy program, highlighted the need for enhancing the program so as to achieve more through the introduction of remedial solutions that could address different sorts of challenges, and about the necessity of introducing crash course programs to most affected areas so as to narrow the existing gab among regions, sub-zones and villages. Opening community libraries to prevent illiteracy from reoccurring and the significance of reinforcement mechanisms so as to encourage teachers of adult literacy program with incentives, as well as skill upgrading programs for teachers who lack required competence and particularly those teaching in their communities were among the findings of the research.

In line with the efforts that has been exerted to fight illiteracy in the country, a new program known as Complementary Elementary Education(CEE) has been introduced in four of the six regions of the country such as in Northern and Southern regions, as well as in Anseba and Gash-Barka regions. The CEE is an intensive and regular literacy program that goes for 3 years and the effect of which equals with that 5th graders.

The primary aim for introducing the CEE is to ensure equitable educational access as much as possible. Having a look at the experiences gained from the introduction of such like program and

particularly that of Anseba region.

The CEE has been carried out in the Anseba region since 2007 in 33 teaching centers. In this program medium of instruction has been Tigrinya, Tigre, and Hidareb languages. The CEE of the Anseba Region is known as “E’riyot” in Tigre language.  E’riyot roughly means “hurry up and exert redoubled effort so as to achieve what you missed.” The program’s name was coined by one father in certain administrative areas of the Anseba region.

Since its inception, the CEE has been introduced in eight of the eleven sub-zone of the region. The ECC has been playing due role in the promotion of literacy program in the regions mentioned earlier. Extension programs have been also introduced in some area of the country and that of Afabet in the Northern Red Sea is an exemplary initiative taken to speed up the literacy program.

“A Plan for Further Expanding and Rehabilitating Ports and Harbors has been prepared:” President Isaias

“No doubt, computer is the best innovative creation”