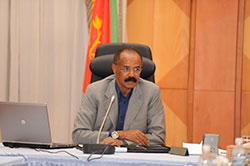 A meeting of the Eritrean Cabinet of Ministers opened today at State House here in the capital.

Asmara, 01 October 2013 – A meeting of the Eritrean Cabinet of Ministers opened today at State House here in the capital.

The meeting conducted extensive discussion on the working paper presented by President Isaias Afwerki highlighting the national development programs for the year 2014, including sectorial programs and details of their implementation, as well as the budget proposals thereof.

The paper presented by the President focused on economic and social development vis-à-vis the prioritized programs targeting reinforcement of ongoing activities in all sectors. Accordingly, he outlined the agricultural development programs for 2014 aimed at giving impetus to national endeavors towards ensuring food security. President Isaias underlined that the programs should focus on boosting domestic production of legumes, oil crops, sugar, livestock, dairy, vegetables and fruits.

He further explained that the action programs relating the fisheries sector pertain to upgrading the capacity of the relevant institutions and facilities, as well as harbors. Moreover, the President cited the programs drawn up to develop the sector on the basis of both internal capacity and foreign investment.

As regards development of infrastructure, President Isaias shed light on the projects drawn up to further develop the capacity of Massawa and Assab ports in the next 2 or 3 years in a manner that would meet regional and international standards involving collaboration with foreign construction companies. The President further indicated that the road construction project connecting Massawa, Asmara, Mensura, Agordat and Adibara is among the priority programs to be undertaken in collaboration with foreign firms. In addition, he said that construction of roads, housing complexes and micro-dams would be undertaken through internal capacity.

In reference to the mining and energy sectors, President Isaias presented in-depth briefing regarding the development of electricity potentials nationwide and furthering the outreach to this end, in addition to linking the domestic network with that of the Republic of Sudan – all in line with the scope of the action programs charted for the coming year. The President also referred to the required budgetary allocation aimed at meeting the demand of all sectors. In connection with mining, he noted the experience acquired from mining companies operating in the country, and said that building internal mining capacity remains to be an issue of paramount importance as regards serving national interest. President Isaias also mentioned the necessary adjustments in connection with revising mining proclamations in the course of next year.

In relation with the trade and industry sectors, the President pointed out that increased focus would be made in development of manufacturing with more emphasis on boosting agro-industrial output. Fostering food processing capacity, reactivating domestic capacity of sugar and oil production, as well as raising beverage supply constitute some of the priorities, in addition to the processing of construction and other materials along with computer assembly, he elaborated.

President Isaias went on to state that additional investment would be made with a view to raising the capacity of land transport, and made reference to the plans drawn towards attaining aviation standards and developing airport infrastructure.

encouraging loan and financing, as well as tax collection potentials.

In the domains of education, health and social welfare, he underscored the need of promoting service quality on the basis of improved managerial capacity, furthering human resource development and ensuring basic supplies, among others.

The Ministerial Cabinet noted the 2014 action programs drawn up in the domains of agriculture, fisheries, public works, trade and industry, as well as transport and communications respectively vis-à-vis the ways and means their implementation could pave the way for improved living standard of nationals.