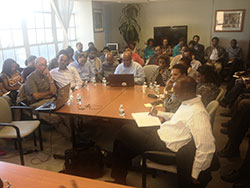 The Eritrean Foreign Minister, Mr. Osman Saleh, said that effective diplomatic and political initiatives for the development of relations both at the regional and international level depends on the prevalence of good neighborliness.

Asmara, 03 October 2013 – The Eritrean Foreign Minister, Mr. Osman Saleh, said that effective diplomatic and political initiatives for the development of relations both at the regional and international level depends on the prevalence of good neighborliness.

Hence, Mr. Osman stressed that public diplomatic activities on the part of Eritrean nationals residing abroad should focus on this imperative. He made the remark at a meeting he held with heads of national committee and representatives as well as committees of community organizations in North America.

In the course of the meeting in New York City, the Foreign Minister and Mr. Yemane Gebreab, Head of Political Affairs at the PFDJ, gave extensive briefings as regards the new phase the nation is entering and the objective situation in the Homeland. Reports indicated that open discussion was conducted focusing on the ongoing efforts towards attaining higher momentum in the nation-building process on the basis of restructuring and ensuring effective as well as integrated human, institutional and material capacities.

Commending the role of Eritrean community representatives in North America as regards keeping nationals informed about developments in the Homeland, Mr. Osman stated that the unjust anti-Eritrea sanctions have ended up in fiasco thanks to the steadfastness of the people and the government. He further pointed out that enemy conspiracies against Eritrea in the guise of ‘human rights violation’ would as ever end up in utter failure through staunch public and government resolve.

Mr. Yemane on his part gave extensive briefing regarding the guidelines and action programs for 2014 that pertain to revising overall potentials and organization through undertaking initiatives inside the country and abroad.

The PFDJ official underlined the vitality of potent economic, cultural, security, institutional and human capacities, as well as social security as regards ensuring sustainability and effectiveness. In this connection, he explained the endeavors being exerted to reinforce the People’s Front and reorganize government and administrative bodies. Likewise, Mr. Yemane underscored the importance of organizing a national committee that would coordinate the work of popular organizations abroad.

The participants of the meeting expressed readiness to keep intact the spirit of staunch resistance against anti-Eritrea agendas, in addition to backing up the implementation of national development programs for 2014.