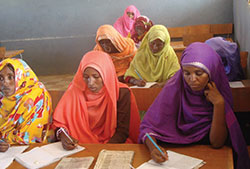 Complementary Elementary Education (CEE) has been introduced in different regions and administrative areas of the country.  The experience of the Anseba region coupled with such like initiatives in different parts of the country have been making due contribution towards the realization of the setout plan of promoting literacy.

Reports of Education Ministry’s branch office in the Anseba region indicate that encouraging outcome has been registered in educating children who missed schooling in due time. The CEE program is aimed at covering five years of school time in just three years so as to enable those who missed school pursue education parallel to children of their age group. Through the CEE, which is named Ariyot it the Anseba region, 6435 children of whom the 2945 are female students have been registered in the past seven years as first graders.  During the launching of the program in the academic year 2006/2007 a total of 219 students were enrolled as first graders. It is not hard to see the progress registered in this program by just making comparisons between the 1846 students registered in the academic year of 2011/2012 with that of the 2006/2007 academic year.

Upgrading people’s awareness and particularly encouraging families to send female students and thus pursue junior and secondary education has been a demanding task. Owing to the concerted efforts of concerned bodies, an encouraging outcome has now been registered the desired end has not yet achieved though. There have been deficits of English language teachers and particular in places where less trained community members have themselves been teachers.

Another shortcoming that need to be addressed is the issue of distant schools. Students who successfully completed their primary school through the Ariyot program have difficulties to pursue their junior and secondary school and particularly female students form distant areas. Attempts are being made to solve such challenge through sending the students to boarding schools.

Twenty students from hard-to reach villages have, for instance, been sent to Asmat Boarding School. The twenty students have participated and in the national junior school leaving exanimation and all of them have been promoted to secondary school.
Despite deficits, the CEE has been further enhanced for the outcome registered so far is very encouraging. What has so far been accomplished is a step forward towards realizing Education for all.

While discussing the achievement registered in literacy programs of the country, it is important to see the efforts that have been exerted in the development of curriculum for adult literacy in mother tongue education as well as initiatives that have been taken to enable students complete their primary through secondary schools through different mechanisms. An extension educational program that introduced in Afabet is an instance which opened a perfect opportunity for a number of nationals to purse their education and even to join tertiary level.  Let’s see the activities of curriculum development and the educational access that has been opened in Afabet. Since curriculum development is the base of any educational success registered in the country, it would be better to see the steady progress in the development of adult literacy curriculum and then the opening of an extension program in Afabet.

“We Are In The Process Of Undertaking Huge Projects In A Bid To Solve Existing Housing Problems:” President Isaias