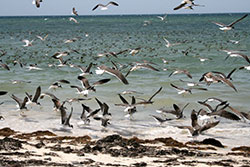 Eritrea, with its mosaic landscapes and pristine marine ecosystem, is the hub of divers faunas and floras.

Archives boasts about 700-790 species of fish; around 20 species of amphibians; 850 species of birds out of which 20 are endemic to Eritrea; 91 species of reptiles; as well as 118 terrestrial  and 18 aquatic species of mammals.

Owing to consecutive wars and droughts, Eritrean forestry and wildlife barely had the chance to follow their natural course of existence. But with the peace and security that prevailed after independence, most of the wildlife returned home and have been proliferating.

The Afar’s friendly and protective attitude towards wild animals demonstrates the civilized stance of Eritreans in the conversation of their wildlife. After all, just like nature influences a society’s outlook at things, societies also influence the course of nature.

The Semienawi Bahri or Eritrea’s Green Belt is the perfect example. Because it has been reserved as a national park, Semieawi bahri is now home to lush forests and abundant wildlife as well as being an outsfanding spot for bird-watching.

Eritrea may have rich forestry and wildlife resources but they need to be conserved as their sustainability plays a decisive role in the development of the tourism sector.
A few facts and figures of Eritrea’s flora and fauna resources:

Forestry
–    At present only 0.8% of the total land area is forested.

–    Among the main types of trees in Eritrea is the doum palms found in the western lowlands,along the banks of the Gash and Barka rivers as well as in Beilul, in the Southern Red sea.

–    Olive and acacia trees grow in the highlands (200 meters above sea level).They are also mostly found in the Semienawi Bahri, Rora Baqla  and  other plateaus, making up the so-called Green Belt.

–    Elephants are most northerly distributed animal populations in Africa. Their distribution in Eritreais limited to the area known as the Elephants’ Corridor  along the banks of the Gash River.  Although they are gradually increasing in number, they call for proper conservation actions.

–    The African wild ass is a critically endangered species at the global level but in a relatively better situation in Eritrea. This positive tendency vests us with added responsibility to work towards it preservation.

–    The Nubian Index, which is another species of great concern at the global level, is found in the Anseba Region around the Kerkebet area.

–    Ostriches are propagating in number in the Anseba, Gash Barka, Southern and Northern Red sea regions.

–    Gazelles are found in the Anseba, Gash Barka and Northern Red sea region.

–    The greater kudu, which has been seen proliferating since independence, is found in all the regions of the country.
Diverse Birds

–    More than 320 species of birds migrate to Eritrea fleeing the cold seasons in Europe and make their homes in the Green Belt and the coastal area.

–    Over 280 species of birds are not migratory birds, and 13 of these are endemic only to Eritrea.

–    There are also numerous varieties of sea birds. In Berasole, where globally endangered species like sea turtles and sea cows are also found, tens of thousands of gregarious flamingoes fill the seashores.

–    While it remains obvious that we need to work harder on promoting forestation, we should also raise the awareness of the people on the conservation of our wild life. Eritrean flora and fauna attest to the prevailing peace security, and are tomorrow’s national tourism resources.

“Reading is the source of knowledge”