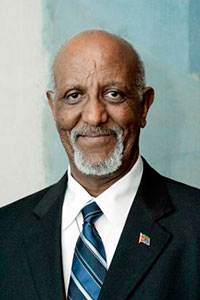 Statement by H.E. Mr. Araya Desta Permanent Representative of Eritrea to the United Nations On item 110: Measures to eliminate international terrorism At the Sixth Committee of the 68th session of the United Nations General Assembly 8 October 2013

Permanent Representative of Eritrea to the United Nations

At the Sixth Committee of the 68th session of

At  the  outset,  let  me join  others  in  congratulating  you  for  your  election  as  Chairperson  of  the  Sixth Committee. Likewise, I wish to extend my congratulations to the other members of the Bureau.

My delegation aligns itself with the statements made by Egypt and by Iran on behalf of the Africa Group and the Non-Aligned Movement respectively under this agenda item.

Eritrea reaffirms its unequivocal condemnation  of terrorism in all its forms and manifestations, committed by whomever, wherever and for whatever purposes. Eritrea strongly believes that terrorist acts constitute a flagrant violations of international law, including international humanitarian and human rights law and fundamental freedoms of people. The recent terrorist attack at the Westgate Mall  in Nairobi demonstrated once again that the region is still prone to terrorist acts despite serious efforts to combat it. It highlights that intensification of cooperation  is needed on  information sharing and exchanging  of  best practices among countries of the  region and other stake holders.

To effectively prevent and control the spread of terrorism, equal emphasis and resource should be devoted to the four pillars indentified in the Global Counter Terrorism Strategy, including the root causes of terrorism and the elimination of conditions  conducive to its spread. Long standing conflicts, conditions of inequality and poverty, among others, must be addressed as part of the overall terrorism strategy.

Eritrea is party to the OAU Convention on the Prevention and Combating   of Terrorism and other relevant regional conventions, including the CEN-SAD Convention on Mutual Assistance in Security Matters which allows  the  members  to  take  stringent  and  tough  measures  to  prevent  terrorism,  hostile  activities  and organized crimes in various forms.

As  detailed  in the  contents  of  my delegation’s  report  (S/2007/66)  submitted  to  the  Counter  Terrorism Committee, pursuant to paragraph 6 of UNSC resolution 1373 (2001) as well as to UNSC resolution 1646 (2005), national legislative measures are in place in the prevention and suppression of financing of terrorism.

Eritrea, as a victim of terrorism with a long experience of combating this phenomenon, is strongly convinced that prudence must be exercised that threat or use of force against the territorial integrity or political independence of any state is not invoked under the pretext of combating terrorism. Any action taken must be consistent  with  international  law.  The  United  Nations  as  well  as  regional  organizations  could  play  an important role in combating  terrorism  and  in ensuring  that terrorism  is not  politicized  to serve specific purposes by some Member States. Acts of terrorism cannot and should  not be associated  with any single religion, nationality, civilization or ethnic group and due regards must be given to legitimate struggle for self determination.  The  use of  mainstream  media  and  social  media  as  a  platform  for  disinformation  is not acceptable.

Eritrea reiterates its commitments  to continue to work at the national, regional and  international  level to develop and enforce effective counter-terrorism measures consistent with international law.

I thank you, Mr. Chairman.

“Our Cooperation with Other Countries in the Health Sector Focuses on the Development of Our Human Resources:” President Isaias