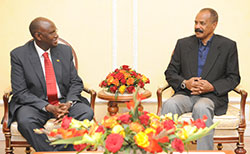 President Isaias Afwerki today received and held talks with the Council of Ministers of the Desert Locust Control Organization for East Africa (DLCO-EA).

In the course of the meeting at the State House, the President stressed that the activities of the organization should be assessed within the context of food security vis-à-vis the need for achieving expanded membership.

He went on to emphasize that the DLCO-EA should reinforce its organizational capacity and scope of work programs. President Isaias also voiced Eritrea’s readiness to back the activities of the organization.

The members of the DLCO-EA Council of Ministers on their part stated that their stay here has enabled them to get acquainted with Eritrea’s right image. They further expressed satisfaction with President Isaias’ constructive suggestions, and said that they would apply the proposals he put forth.

Present at the meeting were Mr. Gaspar Maliya, Director of DLCO-EA, Mr. Komayombi Bullegeya, Executive Chairman of the organization’s Ministerial Council, Mr. Arefaine Berhe, Minister of Agriculture of Eritrea, and his counterparts from the Republic of Sudan, Uganda and South Sudan.