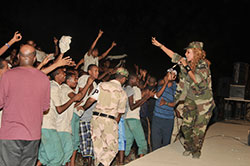 A community festivity was staged in connection with Eid Al-Adha in Sawa through the collaboration between the Ministry of Information and the Training Center for National Service.

Sawa, 15 October 2013 – A community festivity was staged in connection with Eid Al-Adha in Sawa through the collaboration between the Ministry of Information and the Training Center for National Service.

Speaking during the event in which students from Warsai Yikealo School were present, Col. Debesai Gide, Commander of the training center, wished Happy Eid to nationals residing inside the country and abroad in general and the followers of the Islamic faith in particular. He further pointed out that the training center has made historical input in the nation-building process and safeguarding national dignity, besides equipping the youth against anti-Eritrea psychological war and keeping intact national as well as cultural values.

Colorful cultural performances were staged by Aser Cultural Troupe and other artists on the occasion.

Meanwhile, prisoners in Sembel Prison and Rehabilitation Center celebrated Eid Al-Adha with zeal. Reports indicated that a prayer service led by Imam Mahmoud Mohammed Nawood was conducted at the mosque in the Center.

Imam Mahmoud Mohammed wished Happy Eid to the followers of the Islamic faith, and gave briefings as regards the historical background and meaning of the religious event.

Mr. Tesfahiwet Gebrai, head of administration and finance in the Center, pointed out on his part that national holiday and religious events are good opportunity for nurturing cultural and national values among prisoners.