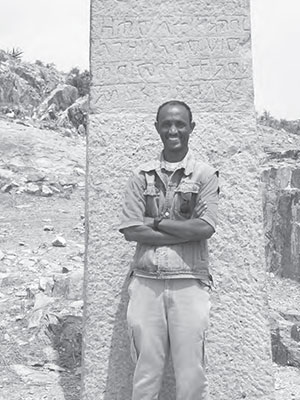 Every language has its own origins that trace back to hundreds if not thousands years ago. Today we are going to discuss this matter with Priest Iseas whom ever since his teenage has been studying the “geez” language.

-Let’s talk about the latest works you published.

Well, the first one is a “Geez – Tigrigna” vocabulary with more than 6000 entries, I have been working on this one for over than seven years. It has been one of the hardest vocations I ever accomplished so far because reviving an old language is really hard. The second one is a pocket “English – Tigrigna” vocabulary and it contains 3300 entry words.

Yes I said that because, geez is the original language spoken by our ancestors from which derived languages such as Tigrigna, Tigre and Amharic. And these languages are similar to each other as they were drawn from Geez but as time went by they also have many aspects that differentiate them from one and other. I paid particular attention to the evolution of Tigrigna so not only was I studying Tigrigna but Tigre and Amharic as well, that is why I said it was a hard thing for me to do even though in the progression I gained a lot of knowledge.

-Can the language really be revived?

I would want to… during this journey I discovered that within this language there are many aspects of our identity that we lost with time, it is a very gorgeously rich language. But its revival won’t be necessary for many because Tigrigna is more effective and technical than geez, whilst geez has its classical beauty and articulations.

-How did you discover the magnificence of Geez?

When I was 13 I joined the Orthodox School of Theology, and that is when I learned geez. But the moment in which I fell in love with this language was when I started studying the history of our ancestors.

-There was a book that you published before the publishing of the vocabularies.

Certainly, its entitled “Geez Historical and Literary Texts” it talks about the origins and evolution of many geez written literary products.

-Tell us a bit about the geez literature.

Many of the written products are either religious or historical: meaning novels and poems about warfare. That is because writing back was reserved to the clergy, so many of the other features of our tradition have been transposed orally.

-What about the high classes of the society back then?

In our country there were never any feudal systems so writing and reading was reserved to the elites only.

-Are we to expect anything in the near future from you?

I am trying to investigate the oral tradition.

-Well, good luck and thanks for being here with us today.

“If people are to be beneficiaries of the Nile, all the muscle flexing should stop:” President Isaias