Miser Vs Spendthrift: Which to Be … or Not to Be? 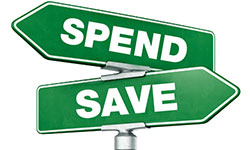 “Oh, unlike his elder brother, who is relatively more extravagant, he is not that much of a spender,” I once overheard my mother talking with my aunt, referring to me as the ‘spendthrift’.

I’m not proud of that, but I would rather be one other than being a tightwad – a miser in simpler terms. Who would crave to be the latter?

Ever since I finished school and started working, my father insisted that I save a certain amount of whatever salary (or pocket money) I earned. And it didn’t take long for me to realize that what I started as an obligation, soon turned out to be an investment in the form of a four figure amount in my savings book.

Although I realized that the more I deposited, the bigger the amount would be; unfortunately it dawned on me that it would also mean I would have to cut back on the splurging which I apparently was greatly fond of. And by splurging, I am mostly referring to my consistently busy café latte style and occasional eating out. Spending on expensive clothing and accessories is not exaggerated, if not totally nonexistent.

I believe this is something anyone can achieve, but to me, keeping a budget (and living just a little below my means) is just something inconceivable… well at least it has been .

But just because I have been designated as a spendthrift, it doesn’t mean that I would rather be a tightwad. Surveys in the western world have found out that tightwads aren’t any happier than spendthrifts, but instead suffer more in some ways. They came up with a rather amusing explanation:

“A spendthrift suffers after he buys something. A tightwad suffers while he buys it and then again afterwards.”

To think of it, they are in a way right. A tightwad, or someone with a clenched fist as we sometimes call such a person, will not only complain about spending a given amount of money on a certain item but will also be constantly complaining (and at times regretting) doing that particular purchase.

Economics 101 has put it in black and white for us that human wants are unlimited. Consequently, we of the spending kind tend to feel less pain when spending money and salary time comes we actually spend more that we would ideally like to spend.

Who hasn’t a friend or an acquaintance, which finds it hard to save and keeps splurging on new shoes or dresses (for the girls) or drinks and latest gadgets (for my fellow men folk)?

And when it comes to the other type, the tightwads, it doesn’t necessarily mean they are all parsimonious or practice frugality.

Being frugal means you enjoy saving money, and people who are more frugal tend to be happier than average. But with the tightwads it’s all another thing. They are less happy.

A study by researchers from the Universities of Pennsylvania and Carnegie Mellon reveals that tightwads save, not because they care more about the future than the supposedly spendthrifts, but because paying out the money is too painful of an emotional experience.
“They pass up purchases not because they enjoy saving money or are sensibly calculating the benefits, but because they hate to part with the money. They would rather do without things they could actually afford and that would genuinely improve their lives…” the study asserted.

Being a tightwad may not be easily identified. It’s some sort of a silent epidemic, whose victims probably don’t even recognize it themselves.

I have come across people who are such misers that get migraines when the time comes to settle the bill in cafes or restaurants. Some are so resourceful and devise cunning means that enable them to pay the smallest amount possible.

If, for instance, a bill for 60 Nakfa is to be shared among four people and there is one miser among the group, then that person takes out a bill of 100 Nakfa with the excuse of not having any smaller changes. The others eventually give in bills of ten or twenties, and that way the smarty pants gets away with a false promise of “There is always a next time!”

And then there is my favorite one (of excuses I mean). “I only have this much amount which I really need to buy and take this thing home for my mother.” A lame excuse of course, but nonetheless the dunces fall for it without realizing the presence of an opportunistic human being among them.

So, if you get to spend too much you are called a spendthrift. If on the other hand decide to abstain from dispersing your cash, then a miser becomes your nickname. So what to do? Is there some common ground for both spendthrifts and tightwads to live moderately? What is your say?

Savers and spenders are different financial personalities. I think that we are all born either savers or spenders. Of course, spenders can certainly learn to be savers, but it doesn’t come naturally.

It will take up efforts, cutting habits and getting to know parsimony.

Personally, I would stick to being called the spender, as long as it is less selfish; as long as it is for the good of others. After all, the Holy Book did say “Give and you shall receive!”
Abenon A.