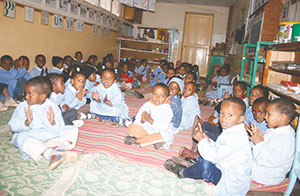 It would be a repetition to say Complementary Elementary Education (CEE) has been introduced in different regions and administrative areas of the country.  However, it is significant to mention the CEE and other programs time and again for it is a cumulative result of different literacy campaigns and particularly development of curriculum which contributed most to the reduction of the country’s illiteracy rate. What is more is that in the course of the phase by phase development of curriculum for adult education two books titled Social Studies for Adults (volume one and volume two) were published.  The two books published in the period of the struggle for independence were in use for 15 years. First grade through third grade adult education program was then given three days a week. The first graders used to attend three classes in three hours while the second and third graders used to attend four classes in four hours of time.

A curriculum developed in the pre-independence day became a foundation to the development of a revised curriculum in the post-independence period. Thus, a curriculum that gives due attention to the economic and social fabric of the Eritrean society came in to being. A book that comprises basic numeric and construction of sentences were prepared in 1997.  A set of fourteen consecutive books in seven languages of the country were published and distributed in 1998. After seven years of the first publication, which is in 2005, a revised book which evolved linguists in the seven languages of the country was also published in 2007. All these books were made to be reviewed by language experts.

Information and views shared in a survey made in 2009 about literacy and suitability of education played due role in the development of well-revised curriculum. Apart from the development of adult education curriculum, books and other educational materials including English language text books for CEE were published and distributed.

All the books published in the pre and post-independence Eritrea have made due contribution in promoting literacy. What has been achieved so far and educational programs that has been carried out throughout the country including extension programs are vivid indications of what the prospect of literacy rate in the country would be.

Afabet urban city is an epitome of successful extension programs of education. Many students who educated themselves through such programs have now been able to participate in the National Secondary school leaving matriculation exam.

that educates from 6th through 12th grade.

The night shift educational program was started in 2006/2007 academic year with the collaboration of NUEW and initiative of interested students. The encouraging outcome achieved through the introduction of the program has attracted the attention of the Ministry of Education and PFDJ. Hence, NUEW, PFDJ and the Ministry of Education worked hard to boost the number of students. Major contribution of NWEW in encouraging students, upgrading women’s awareness as regards what benefits could be achieved through education and in ensuring sustainability of the program deserves due appreciation.

Owing to different motivation mechanisms, the night shift education program which started with only five students has now, in the 2012/2013 academic year, reached to 170 students who are learning from 6th to 12th grade. What makes this program very successful is women’s participation. Out of 35 students who participated in the secondary school national examination the 32 were female students.
The night shift students have been pursing success no matter where their initial starting point was. These are students who longed for success for a long period of time and the places where they are from have a very limited educational access but they moved to a place of wider opportunity and thus become successful in their

endeavors. What makes the experience of Afabet unique is that the student who have been scoring impressive results are mothers in their forties, and others are patents who shoulder heavy familial responsibility.

She is an exemplary woman who fought against societal pressure, difficulties of maternity and other challenges of wedlock, Amna Mohammed Omar. Even though she attended regular education from primary through secondary school, she was forced to get married leaving aside her dreams of pursing her education until it reaches a targeted aim.

Amna have completed 12th grade with full collaboration of her husband and of course motivation of her teachers. She finally seats for secondary school matriculation exam. It was in the middle of the examination room that labor pains started. Her teachers were anxious about her and about the incomplete examination paper, and asked her what she would do. Her answer was “I will finish it while I am in the maternity hospital” and she did so. Such like initiatives of individuals and an intensified eagerness to get educated in what contributed most towards a successful literacy campaign. Thus, “Education for All” continues to win over illiteracy.

“If people are to be beneficiaries of the Nile, all the muscle flexing should stop:” President Isaias