DLCO-EA: On Mandate of Preventing National and Regional Disaster 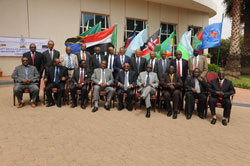 Fighting any environmental hazard or infestations of varied types or else natural barriers that could affect a normal development of any undertaking is an issue which allows no delay. As most environmental issues have a transnational nature, combating such challenges in isolation would end in utter failure. Thus, as most environmental issues have a regional and global nature, combating them with coordinated efforts of nations and particularly integration among nations that are vulnerable to seasonal or recurring negative environmental effects is a prerequisite towards full success of any undertaking that mainly relay on sound ecology. It is based on this outlook that Desert Locust Control Organization for Eastern Africa (DLCO-EA) was founded about 60 years ago. Member states of this regional organization are Eritrea, Ethiopia, Tanzania, Kenya, North and South Sudan,

DLCO-EA, which was founded in 1962 in Asmara Eritrea held three of its annual sessions in the post-independence Eritrea in 1996, 2005, and in 2013. The DLCO made extensive deliberation as regards reinforcement of its regular undertakings as well as broadening its scope in mitigating other challenges in its 58th session which was held last week in Eritrea at Asmara Palace.
In a briefing he gave at the annual session, Arefayne Berhie, Eritrea’s Minister of Agriculture said that drought, deficits of food supply and soaring food prices have been the major challenges at regional and global level particularly as of 2006. The Minster further highlighted the imperative role the regional organization could play and also the collective commitment of all member states towards alleviating the recurring challenge that has been negatively affecting agricultural yield.

Infestation by pests, locusts and other environmental challenges could only be prevented through regional integration and that is why all member states of DLCO have been reiterating to jointly combat any challenge. Director of the DLCO, Mr. Gaspar Maliya said in this regard that 2012 and 2013 were the years in which countries of the Eastern Africa severely hit by locust infestation. He went on to say that a study that would enable the member

states combat such occurrences would be carried out recently.

Broadening the scope which was mainly confined in controlling desert locusts so as to comprise mechanisms for the prevention of tsetse fly, swarms infestation among others that has been reoccurring in the Eastern Africa is timely concern of the regional organization. Climate change has also been worsening the prevalence desert locust which by far heightens crop loss by great deal. According to Mr. Komayombi Bullegeya, Chairman for the Council of Ministers, it is time that the DLCO needs to upgrade Skills of its human power and to gird itself with modern equipment so as to flexibility eliminate any challenge that has been further aggravated due to climate change.

As was indicated in the 58th session, the primary objective of DLCO-EA has been has been to intervene before the outbreaks pests’ occurrence and to prevent and control from spreading and causing antennal and natural disaster.

Present in the DLCO-EA’s annual session Mr. Heury, Director General of Agricultural Extension in the Ministry of Agriculture, said that since Eritrea is situated at the front line of the devastating pests of Desert Locust, the fears are not coming only from within the region but as far as from the western part of the continent and the Middle East neighboring countries too. The government has given locust and other migrant pests control a top priority in order to safeguard food security.

Mr. Heruy further pointed out that the devastation of Desert locusts, birds, and army of worms have been the main causes of the regional and general problems of the people of the Eastern Africa and such incidents have been leading to frequent occurrences of hunger and mass deaths.

What has so far been carried out in controlling and preventing Desert Locust and other infestation has been commendable. However, the prevention mechanism need to be further reinforced for the nature of the locust or

other sorts of infestation have a fluctuating nature.

Having an organization that deals with issues that give utmost priority towards the ultimate improvement of livelihood of the peoples of the region is undoubtedly beyond a necessity. However, the responsibility this regional organization shoulders is not an easy one. “It is tough task for the organization to tackle the serious pests due to its varying behavior, ecological and climatic conditions as well as its great mobility to vast areas within few days and weeks. It will not be exaggerated if we say Desert locust is very devastating pest four our region like other natural disaster of flood and earthquakes.” Mr. Heruy Said.

The annual session of the DLCO-EA has indicated that appreciable jobs have been carried out in the prevention of devastating occurrences. Reinforcing its capability to address challenges and charting out programs so as to broaden its scope was extensively discussed in its 58th session. The DLCO-EA has decided to hold its 59th session in Tanzania.

“Regional stability is essential not only for Eritrea but for mutual benefit among peoples of the region as well:” president Isaias

Missing someone: the biggest heartache