“Nation building is the biggest challenge of the less developed or third world countries in Africa:” President Isaias 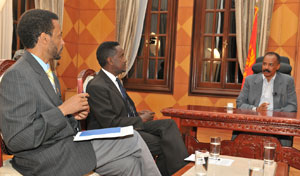 It  is  to  be  recalled  that  President  Isaias Afwerki  conducted  a 3-day  extensive  interview  from the  6th  to  8th  of  September  2013, with  local  media  outlets  on  pertaining  domestic  regional  and international issues. Excerpts of the ninth and final part of the interview follow:

Mr.  President, we are now in the last part of our interview. Allow us to pose a universal question pertaining to the culture of nation building. We have seen in these 20 years that nation building takes up a lot of effort, sacrifice and dedication. And with limitations in resources and addition of hostilities, it obviously gets even more difficult. What culture  and  values  do  you think a society should possess so as  to  be  able  to  confront  such  a situation  and  attain  its  visions and objectives? And to strengthen these values and cultures, what should be done in terms of political and ideological works?

Nation  building,  not  only  as  a concept  but  also  as  an  objective, is  a  challenge  that  concerns  not only us (Eritreans) but all nations as well. If we take Sudan for ex -ample, it gained its independence 40 years before we did; but if we look at the situation in the North and South today, did the people succeed in building a nation? Nation  building  is  the  biggest  challenge  of  the  less  developed  or third world countries in Africa.

Our exceptionality and advantage is our liberation struggle. Taking  into  account  the  situations between the 1950s and 80s, we can say we have gone beyond the  processes  necessary  for  laying  the  foundations  for  domestic adjustments. We have laid strong grounds for nation building.  Eritreans, particularly after independence, were able to lay a good foundation without any dissimilarities and external interferences. And  this  is  one  of  the  factors  of nation  building  and  something that you cannot find in other peoples.

In Sudan for instance, we talk and exchange experiences with both the North and the South and this is where the first challenge lies.  The worse thing is that, tribalism, which was never seen before in Sudan, has led to civil war.  Such fragmentations don’t help the process of nation building.  The  people  of Sudan were a civilized people, in politics  and  other  arenas  as  well, and  should  have  never  been  put into  such  a  quagmire;  regard -less of whether they got there by themselves or pushed by external factors. But if Sudan is to be stabilized, these problems must first be dealt with.

In our case, the tribal divisions and  segregations  that  existed  in the  1960s  were  surpassed  and  it wasn’t an easy task to wage a struggle that brought all Eritreans together  and  aiming  for  one  vision.  During such a process, on top of the existing challenges, we also endured a civil war.  History tells us that the British came with intentions of dividing Eritreans along religious lines.  This also went by and taught us a lesson. All this was a big step towards nation building.

The structure, mode of functioning, and ideology that the Eritrean struggle for liberation had at its outset would not have even brought independence.  But we paid sacrifices, learned our lesson and overcome it.  The harmony and sensitization of the people that we harnessed thereafter led us to defeat the strongest army in Africa then. These principles that we have cultivated back then are what guide us today. Dividing up people for individual benefits is not part of our principles or culture.  These principles are an asset.

So how do you strengthen this foundation? This was our challenge in these 20 years.  Numerous attempts were made to fragment this foundation. The  different  external  ploys  being carried out now after 20 years are  also  aimed  at  disintegrating the foundations we have laid and the developing processes we have started  in  economic,  political, social  and  security  arenas.  Most of the time, politics that is based on treaties and alliances of tribes, clans,  regions  or  religions  is  the reason  for  the  failure  in  nation building  processes.  Only  when  a political system that relies on the nationality  or  the  nation  itself  is functional  can  you  say  that  there is  a  healthy  nation  building  process.

If  an  official  gets  corrupted, embezzles money, opens different offshore  bank  accounts  and  does other  illegal  activities,  his  only shield is his clan or tribal affiliation. We can take a look at different countries whose foundations have been fragmented for such reasons.  The Democratic Republic of Congo, Congo Brazzaville, Rwanda, Kenya, Uganda, and even our neighboring countries…  The  disintegrative  way  of  running things caused instability and violation  of  rights  of  the  people in  these  countries.  This in turn aggravates corruption. Power becomes for the sake of money and money for the sake of power.

Why most countries are in conflicts despite their ample resources is because this fragmental foundation, patched up by corruption, cannot be undone. And when the problems arise, the nation stops halfway in its rebuilding process.

Those who are working on setting  peoples  apart  are  those  very quarters  that  appear  to  care  for  “human  rights.”  Their main objective is to disintegrate the foundation of unity.  But our reserved resource from the liberation struggle has acted as immunity against such perpetrations.  The Eritrean people are very strong and have overcome all these problems with bravery and patience.  It’s true that in such a situation, there are a handful of individuals who chose to become instruments. The ploys being  staged  using  these  individuals  aim  to  disrupt  the  nation building process, to at least delay it  and  make  it  lag  behind  if  not completely bring it to a standstill.

You need to consider all these challenges and understand them in detail. We should not be relaxed just  because  we  have  overcome our  challenges;  instead  I  say  we must always be able to take active initiatives.
Other than as a concept or philosophy, how can you define nation building in tangible terms? Since ensuring the real nation building process is something that we have been working on day and night, it can be discussed in detail in a different occasion.

The  topic  on  restructuring  and reorganization  that  you raised for  example  looks like  a  simple  ‘formula.’  Awareness, organization and arming also look like simple concepts. Awareness is not an easy matter. It doesn’t concern one or two experts but the population as a whole.  And  it  is  not  something that  stays  in  one  level,  it  has  to be  dynamic.  If there is planning, you need to be organized.  You gear what you have towards one goal and get organized and work to achieve that goal.

What is our current situation? Where are we heading?  What are our biggest challenges? And how do we overcome them?  There needs  to  be  proper  training  and campaigning  as  to  how  we  need to  gather  our  resources,  however big or small, and ensure their efficiency beyond the challenges.

Mr.  President,  is there  any  message  you  wish  to convey  to  the  Eritrean  people  at home  and  abroad  as  well  as  the Eritrean  Defense  Forces,  who altogether  never  gave  up  their resistance  towards  all  hostilities? What would you like to say regarding what should we do and expect as well as our national compensation and hopes for the future?

When you look at the fortitude of the Eritrean people across different stages and compare it with that of other peoples, you can easily  see  how  deeply  rooted  it  is. Foreign observers assimilate Eritrean nationalism with “idolization”, which doesn’t exist among other peoples. Had it not been for our people’s resistance, the problems in the last 15 years wouldn’t have been overcome. How did we get to where we are after the illegitimate sanctions of 2009? Who stood firm amid all kinds of ploys? One can probably attribute all that to the leadership, government, the ministries  and  administrations… but  in  reality  it  was  the  staunch resistance  of  the  people.  Even now,  since  the  attempts  from  enemies  will  not  stop,  one  can  call for the continued resistance of the people. This call is not because we are unsure of our people but is merely a reminder for the people to always remain vigilant, and that it should work even harder in 2014.

We  have  already  seen  how  disastrous  the  regional  and  global dominations  have  turned  to  be. The adventurous policies that set to “control the world and declare supremacy in money, arms, technology and other influences” ended up leaving the US with a debt of 17 trillion dollars.

The  people  and  the  different government  bodies  should  take into  consideration  the  challenges put in our region as a consequence of  these  crises  and  act  upon  it. And  since  there  are  numerous idle talks spreading around, meetings,  discussions  and  interviews should  be  held  so  as  to  increase the awareness of the people. You shouldn’t  exaggerate  the  small livelihood  problems  and  blow them out of proportion; but before disregarding  them,  you  need  to bring them up in open forums for discussion. Concerned authorities should hold interviews.  Even  the smallest  speculations  should  not be  overlooked  but  instead  analyzed to find out the responsible parties  and  the  objective  behind them. Everyone should have equal knowledge on the most important issues.

We have heard about the national reserve army. One needs to understand that everyone working under the government is paying huge sacrifices, including the shortages in housing and other basic needs.  And this needs recognition. All  the  youth  deployed in  the  army,  line  ministries  and administrations,  construction works, development endeavors or working  in  different  areas  of  the country  in  the  name  of  national service and they nee not only gratitude but more.

In the end, apart from the usual message to the people, I think it is right to call on all those who are working  tirelessly,  leaving  their individual  needs  behind,  to  keep shouldering  the  responsibility  no matter how difficult it may get.

Lesson from Eritrea : Meeting MDGs as Soon as Possible