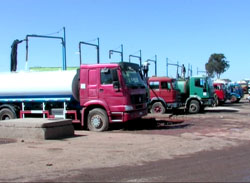 A water distribution center around Mai-Temenai, Asmara, has been repaired and made ready for service provision.

Asmara, 2 November 2013- A water distribution center around Mai-Temenai, Asmara, has been repaired and made ready for service provision.

Commending the timely response to repair the water distribution center, the local inhabitants called for timely measures to tackle other social problems as well.

Mr. Eyob Abraha, representative of water transportation vehicles in the Defense Ministry, said that the repairing of the center would make significant contribution in saving water wastage, and called for sustainable follow-up on the part of concerned institutions.