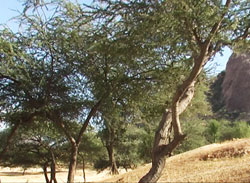 Hagaz, 04 November 2013 – Area administrators and communities in Hagaz sub-zone have called for further efforts regarding preservation of indigenous trees in Shebeq, Ad-Omar and Ad-Arey areas. They also indicated that they have been striving to deter instances of deforestation on the part of individual community members, and that enclosures are witnessing significant development following the initiative taken to enhance protection thereof.

Mr. Bahlibi Mehanzel, Administrator of Shebeq area, disclosed that a number of endangered wild tree species have flourished well, while the area has provided a good habitation for a number of wild animals thanks to the tasks fulfilled to this end.

Among the inhabitants, Ms. Kibra Melake and Mr. Teklehaimanot Habtetsion said that the role of communities and Area administrators is a prerequisite for the realization of the cherished national goal as regards forestry and wildlife. They also asserted their readiness to collaborate in such undertakings.

In the same vein, Mr. Adem Mohammed-Ali, Administrator of Ad-Arey called on the inhabitants to step up community initiative pertaining to afforestation and preservation of indigenous varieties, besides stating that there is a plan to establish a new wood enclosure in Qar’owat area.

Reports indicate  that the majority of the well-flourished indigenous trees exist around the foothills of Tsaeda-Emba Monastery.