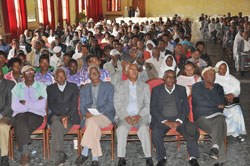 A seminar was conducted yesterday at Asmara City Hall aiming at reinforcement of sport activities in Gala-Nefhi sub-zone.

Asmara, 04 November 2013 – A seminar was conducted yesterday at Asmara City Hall aiming at reinforcement of sport activities in Gala-Nefhi sub-zone.

Speaking at the seminar in which the inhabitants and owners of business ventures took part, Mr. Habte Gebremariam, Administrator of the sub-zone, explained that efforts have been made to raise community awareness so as to give impetus to the popular base of sports activities. He also expressed conviction that that the assessment made in the course of the seminar would serve as a stepping stone to a better outcome.

Mr. Gebrekidan Tewoldebirhan, Administrator of Adi-Guaedad village, said that the role of communities and wealthy nationals is of vital importance as regards nurturing competent sports persons, and thus calling for increased financial and other inputs in this connection.

Reports indicated that more than 400,000 Nakfa was extended by the participants.

In closing remarks, Mr. Endrias Asmerom, head of the Sports Commission’s branch in the Central region, called on citizens to enhance role in this regard and other sub-zones to emulate the initiative taken by Gala-Nefhi sub-zone.