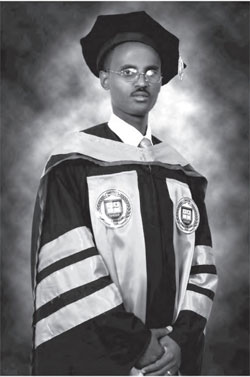 He is one of the best known pediatricians amongst the youngest generations. Born in 1982, Dr. Tesfahiwet has been a much rewarded student through out his studies, though he is still at young age he has been so very much able to attain a rich knowledge about the human anatomy and has been devoted to his profession for almost four years.

-Let’s start off today’s interview with an introduction to your childhood.

Well there is nothing much about it. But I was born in the country side so I grew up surrounded by a very rural life style. The choruses are all the same: every activity one does is somehow connected to the farm, so I actually had no clue about the world outside of my village. As I started going to the elementary school though my parents saw in me the passion that I had for knowledge so they did everything they could possibly think of to make sure I had the right amount of knowledge one needs. In time I started having dreams of becoming a doctor: as a kid I used to think of doctors as some kind of geniuses and I started thinking that I myself too could become one of them. So I worked really hard I dedicated everything in studying and I finally realized my dream and now it feels great!

-How hard was the path that you took?

It was really hard. I had to move out and live on my own ever since high school, I hated living alone and away from my family. There were times in which I just wanted to run back home and never get out of it. I would always feel in depth with my parents because they were sacrificing a whole lot to support me financially. And so many other things that would jeopardize my emotional stability,

but now that everything had paid off. I am actually glad I didn’t give up my studies when times got harsh.

-What is that you appreciate most about your profession?

Every profession has its own value and significance. But being a doctor is connoted to a big responsibility… which is life. People have being inventing a lot of kits and equipment’s but none has been able to create a living thing. Life is something that’s given from the above and it can’t be replaced nor manufactured, that is why it gets to be harder than other professions.  It is a very challenge full but a very rewarding profession.

-You are a pediatrician…

In deed I am. I love what I do, children are the most innocents creatures ever and being able to help them is actually a big honor to me as a doctor. Especially those don’t know how to express or put their feelings in words… they really makes my heart pound so much.

-You are well known for your good manners as a doctor…

It is a true honor for people to think so of me. But I don’t think I am any different from any other of my colleagues. I am the youngest out of them all so I usually have a humble approach toward everything because I know I have a long way to go and I need to learn a lot from seniors. As I became a doctor I learned a very important thing and that is humility and modesty, because a patient needs to be understood and to nourished with hope. The latest medication wouldn’t do much if a patient does not have inner peace, tranquility and the certainty or faith of getting better.

-We sure did learn a lot today. Thanks for sharing your time with us.

Thank you so much.