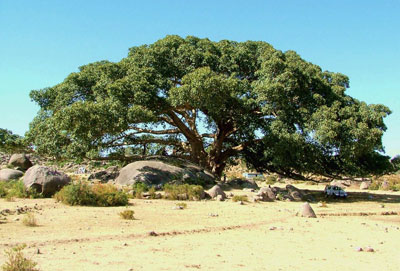 This story is based from a paper presented by Mr. Solomon Tsehaye “Aspects of Traditional Widom: As Agents of Conflict Resolution”. In his paper Mr. Solomon explains how people have always been engaged in trying to settle conflicts with the aim of ensuring social stability. He went on to say that the conflicts resolved wisely were settled for good while those mishandled became causes of long standing problems, resulting in disrupted social progress.

In a culture that abhors conflicts, which are inevitable results of social interaction, resolution in a way that advances human development is of utmost importance.
Let me now leave you enjoy the following story:

There is a story told that there lived a woman with two lovers at the same time. She used to indulge them at different and regular times, one during the daytime and the other at night. Each of them believed that he was her only boyfriend. One day when the night time lover paid her an unexpected visit he found her daytime boyfriend in her house. He was furious at him and so was the other. They wrangled bitterly and started fighting in an effort to eliminate one another’s competitor. Since she loved both equally, she did not want to lose either of them. But she could not stop them fighting. So she cried for help and people gathered soon. They forcefully separated her fighting lovers who were vowing to kill each other.

Some sagacious people from the crowd inquired what the problem was. Upon knowing the love affair the woman had had with the two men the sages wanted to settle the fatal dispute between the men by trying to convince either of them to leave the woman to the other because it is socially unacceptable to be the lover of a woman who has another lover.

But none of two was convinced. One of them said that he cannot live without her body-smell and the other affirmed that it is impossible for him to survive without kissing her. It was difficult for the inquiring men to understand why both were mysteriously glued to the same woman while there were so many beautiful and lovable women around them. Yet, as wise men, they had to resolve the conflict in order not to risk the lives of the lovers. They proposed that the lovers divide the woman between them with one only indulging in the upper half of her body and the other only in the lower half and that this should be decided by casting lots. Both lovers and the woman endorsed the proposal. The lovers drew lots and each of them knew his respective part.

As time passed the woman gave birth. But the lover stationed at her upper part refused to allow her to suckle the baby because her breasts fall under his domain. The baby would starve and die. The father was urgently called to solve the crisis and save his baby by negotiating with the man next door, but to no avail. The adamant refusal of the man of the upper half compelled them to rush to the ruler of the land hoping for a fair judgment.

When the ruler asked them what their case was, the father accused the other man for not letting the baby feed on its mother’s breast. The ruler was stunned at hearing this and inquired how on earth a man can have prohibitive powers on the natural right of a baby to feed on its mother’s breast. The man from the upper half told him the background story of the affair and the agreement reached under the arbitration of certain wise men. Before taking any decision the ruler preferred to consult with the arbitrators and demanded that they be brought to him instantly.

They appeared in front of the ruler and were asked to elaborate on how they arbitrated the dispute. After listening to their explanation the ruler noted that dividing the woman between the two lovers was wrong. He tried to justify his position by the problem created after the birth of the baby. The wise men defended their arbitration as the best settlement they could ever think for that particular dispute. Furthermore, they said that had it not been for that unique type of arbitration the two lovers would have killed each other. They also argued that, not only were they alive but also reproduced by being able to have a child.

Considering their argument, the ruler, was inclined to believe that the wise men’s arbitration provided a practical resolution to the conflict, and hoped that they would also be able to think of a solution to the pressing problem of feeding the baby. He, therefore, assigned them to arbitrate the new dispute, too. The men briefly took counsel together and came back with a solution. They proposed that the two lovers exchange parts. The father of the baby ascends up so that his child shall have the right to breast feeding, while the other man descends down to the lower half so that he shall have the chance to have a child in his turn. They also concluded proposing that the shifting from the upper to the lower and vice-versa should continue in such a rotational way each time a new baby is born.

The lovers adopted this arbitration proposal as favorable to both of them and the ruler was happy to see the problem solved.

Mr. Solomon inserted a disclaimer for this story. He asserted that while the story was certainly part of the Eritrean oral traditions, it could by no means be real.

“It is a product of the imagination and intellectual exercise of wise ancestors to create stories which teach important lessons and entertain. The dividing of the woman between the two lovers should not imply that she has been considered a sex object. Nor should this be interpreted as gender discrimination. The interconnected biological roles of a woman as a child giver and breast feeder were aesthetically essential to constitute the central conflict of the story. Thanks to her multiplicity, the nature of a woman could provide a sharp conflict which challenged and stimulated human wisdom to resolve it.”

Oral traditions have such tremendous significance in revitalizing cultural legacies and bequeathing them to coming generations. These communal treasures need to be preserved so they can serve as sources of wisdom to consult and learn from in the age of globalization.

Life and its meaning Eritrean style

Hospitality at its greatest