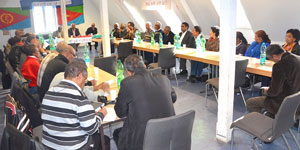 PFDJ members in North Germany asserted that they would back up national development endeavors.

Asmara, 14 November 2013 – PFDJ members in North Germany asserted that they would back up national development endeavors. They made the pledge at an assessment meeting, during which Mr. Yohanes Woldu from the Eritrean Embassy in the country called on the nationals to become beneficiaries of the investment prospects in the Homeland.

From the Public and Community Affairs Department in the Embassy, Mr. Kahsai Tewolde and Mr. Futsum Sahle lauded the accomplishment registered in the year 2013 by the PFDJ members, and pointed out that they would exert further efforts with a view to

Moreover, Ms. Semhar Gebreab gave briefings pertaining to the structure, goals and guidelines of the YPFDJ vis-à-vis the activities conducted and the development attained thereof.

The participants of the meeting conducted discussion on the assessment report, and said that they would continue to voice staunch resistance against enemy conspiracies.