Gossip and its effects in the work environment Part II 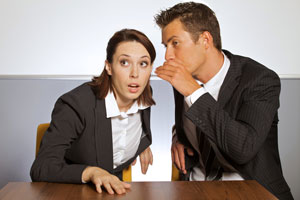 1.    Someone who likes to talk about someone else’s private or personal business.

2.    Idle talk about someone’s private or personal matters, especially someone not present.

Though the etymology of the word suggests a rather pure implication, the word ‘gossip’ and the connotation in which we use it has undergone many changes, so that it has now been reduced to a derogatory term. Gossip, in the earlier times used to mean ‘a close friend’ or ‘a chum’. But if in today’s world you point out to someone and say ‘He/she is my gossip’, people are going to roll their eyes and look at you!
Gossip is idle talk or rumor, especially about the personal or private affairs of others.

While gossip forms one of the oldest and (still) the most common means of spreading and sharing facts and views, it also has a reputation for the introduction of errors and other variations into the information thus transmitted. The term also carries implications that the news so transmitted (usually) has a personal or trivial nature. In this instance we can compare it with conversation.

Everyone at work loved Itamar. She was smart, intelligent, funny in a charming way, and radiated with a sense of austerity that demanded respect and at the same time was immensely attractive. All the guys in the workplace were attracted to Itamar, and so was Semere. He wanted to get to know her better. He wanted to ask her out. But rumor had it she had never been with a guy before, that she had never dated anyone. If Semere was to believe gossip, Itamar was tactless and quite an unattractive person. And so Semere never asked her out. Semere was left with a pang in his heart. If only he had taken a chance and tried to verify the rumors, he would have known what a warm, romantic and beautiful person Itamar actually was, and how terribly wrong the gossip was…

More often than not, workplace gossip is used in a way that is mean, sarcastic and aimed at altering an employee’s image in the organization or company.

One would wonder as to why people would be concerned with gossip. The fact is that it is much easier, as well as far more enjoyable, to identify and label the mistakes of others than to recognize our own.

•    Helps you bond with your colleagues

•    Helps you come to know people without interacting with them

•    Allows you to pursue a romantic interest

•    Affect your reputation/earn you the reputation of a gossiper

•    Fuels divisiveness, leading to isolation of the ‘less popular’ employees

Workplace gossip is all too common and it can be devastating to entire companies and to our careers as well, Bilal said

Whether any one of us has been the one gossiping or we have been gossiped about, it’s important that we learn how to deal with gossip and how problematic it can really be. It doesn’t matter whether gossip is true or false, it still should not be allowed to have a place at work.

The negative effects of gossip are strained relationships, mistrust, discontentment, even anger, and decreased productivity. For example, how much time have we wasted, in long conversations, complaining to others about our work mate, who isn’t as helpful as he/she could be, or your partner who isn’t as loving as you’d like, or how you know that other department has a hidden agenda that conflicts with your team’s goals!
Most of us intuitively realize that people, who are gossips, do not have an inner world that is healthy and rich.

Do you get, that if someone is a workplace gossip, it is because they feel insecure/inadequate? And/or they have a low sense of self-worth, and are desperate to find some way of feeling better about themselves. If we pinpoint at someone at the work place we can study their personality traits

Contrast this with a person who shies away from gossip … these people are too busy focusing on being the best they can, on making their personal dent in the universe
Gossipmongers aren’t trusted. We can bet you to have caught yourself wondering, as you walk away from a gossiper: “I wonder what s/he says about me when I’m not around?”

Gossip is a very dangerous tool. We should be more wary of the gossiper, and not the gossip they’re trying to relay to you.
John Lydon

Every great relationship is built upon a foundation of trust, reliability, honor, and integrity.

When you are to mount on the leadership saddle you will be responsible for developing healthy relationships, both with your direct reports, your colleagues and your senior leaders. Involving yourself in workplace gossip is a surefire way to undermine your credibility as a person and as a leader.

A big problem, when you take part in workplace gossip, is that you are telling the wrong person. Invariably you are telling a person who can’t improve the performance. When you observe the gossip mongers they very often do not sit in their place. They enjoy going here and there. Thus they are less productive. In fact they infest the entire staff members with their venomous gossiping attitude. However they are the ones who seem to win the attention of their leaders at the expense of loosing some or many of their industrious workers

Gossiping may make you feel good for the moment, (you got some frustration off your chest) but it doesn’t really make the issue go away, does it? Nor does it build powerful performance!

If your workplace is filled with gossip, you can almost guarantee that it is under-performing.

Gossip is one of the greatest causes of distrust and consequently under-performance in any business.

What sets high performance leaders apart from others is that they:

•    Always go directly to the person with whom they have an issue and discuss it.

•    Are focused on getting the relationship and the performance back on track, fast.

As a leader, it is not your role to be a sounding board for complaining and gossip in the workplace … or to solve people’s issues for them. Rather, it is your role to coach and guide people to resolve their issues with others, quickly and successfully.

“My students are my life’s greatest teachers”