The potentials for future Tourism development in Eritrea: (Part I) 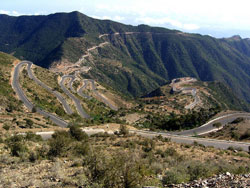 A land undiscovered treasures; Eritrea has been endowed with rich and diverse truism resources. These yet unexplored natural, historical, cultural and archeological wonders offer great potentials for the country’s future in tourism, making it an ideal and fascinating tourist destination.

*Diverse domestic and wild fauna: ostriches, gazelles, antelopes, tigers, pythons, elephants, hyenas, foxes…… as well as over 900 kinds of birds, 13 of which are indigenous only to Eritrea.

*Different types of trees among which palms, sycamores, as well as olive and coconut trees………..

*Beauty in diversity: diverse cultures and traditions of Eritrean ethnic group, their hospitality, their unity and respect for each other….

*Strong political culture: the prevailing peace and security of the country as well as the steadfastness and tolerance of its people.

*Development endeavors based on the government’s policy of self-reliance and aimed towards the effectiveness f the tourism industry. Projects include works of

infrastructure in the health, education, agriculture, transport and communication sectors….

All these are only some of the features that make Eritrea an attractive tourism proposition. Each region of the country also possesses its own tourism attractiveness, which was witnessed in a series of reconnaissance tours conducted by the Ministry of Tourism. The expeditions, which started towards the end of 2009 and concluded in March 2011, were originally aimed at promoting domestic tourism.

Although domestic tourism is directly associated with the economic situation of citizens, it is the people at home who principally have to appreciate their own culture, history, and resources before they invite others to do the same. To that end, many nations have been visiting, in groups, the country’s tourist places. And the persistent effort of the ministry is, and has always been, to keep that momentum and to encourage similar trips so as to enable citizens make repeat visits.

After all, only when Eritreans know how richly endowed they are and how diversified their resources are, can they be in a position to work towards preservation and promotion.

It has however been a debatable question whether Eritrea truly owns so many tourism resources. It does, indeed, even more. In fact, Eritrea has extraordinary resources foundations for tourism and it prides itself of a rich historical heritage that ranges from one of humans’ ancient civilization, thousands of years ago, to its recent hard-won independence and the reconstruction endeavors it has been undertaking.

There are various factors contributing to the diversity of Eritrean tourism attractiveness. In the historical aspect for instance, there is no reason why our nationals wouldn’t want to visit