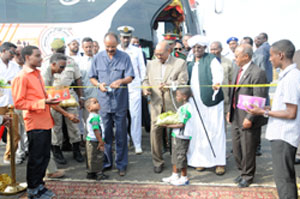 In a speech he delivered at the opening ceremony which is being staged at the Port Sudan Stadium, President Isaias expressed gratitude for the warm welcome he was accorded by the people and Government of the Republic of Sudan, and indicated that the relationship between Eritrea and the Sudan is founded on solid foundation and that there needs mutual efforts for its further development. He also congratulated the leadership of the Republic of Sudan for the all-round development registered in the Red Sea region in the past years.

President Omar Al-Bashir on his part expressed appreciation for the participation of President Isaias at the 7th Tourism and Shopping Festival, and described the President “Strong leader who led the Eritrean Revolution to victory”.

President Isaias left for Port Sudan in the afternoon hours on 23 November upon official invitation to participate at the Festival.

Upon arrival in Port Sudan he was awarded warm welcome by President Omar Hassan Al-Bashir, Dr. Mohammed Tahir Ela, Administrator of the Sudanese Red Sea region, senior Government officials, and members of the Eritrean community in Port Sudan, as well as a number of residents of the port city.

Likewise, President Isaias Afwerki accompanied by the President of the Republic of Sudan and other senior Sudanese officials visited the newly constructed asphalt road in Port Sudan.

Reports from the Ministry of Information’s correspondents indicate that senior Eritrean Government officials including Ms. Askalu Menkorios, Minister of Tourism and Maj. Gen. Humed Karikare, Commander of the Eritrean Navy, are participating in the Festival.