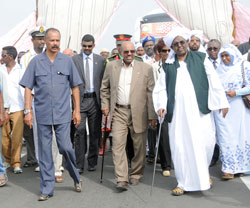 Upon official invitation the President participated in the 7th Tourism and Shopping Festival in Port Sudan, as well as holding talks with President Omar Hassan Al-Bashir on bilateral relations and visited different institutions.

On 26 November, President Isaias accompanied by President Omar Hassan Al-Bashir, visited the Plastic Store in Port Sudan city, during which he received briefings by heads of the project on how wheat is put in plastic bags for safety and the duration of its being kept intact.

The two leaders also opened the tourism resort located 180 Km. from the city of Port Sudan.

Upon arrival in Kassala region travelling 700 Km. by road, President Isaias was accorded warm welcome by Mr. Mohammed Yosuf Adm, Administrator of Kassala , and other officials of the region.